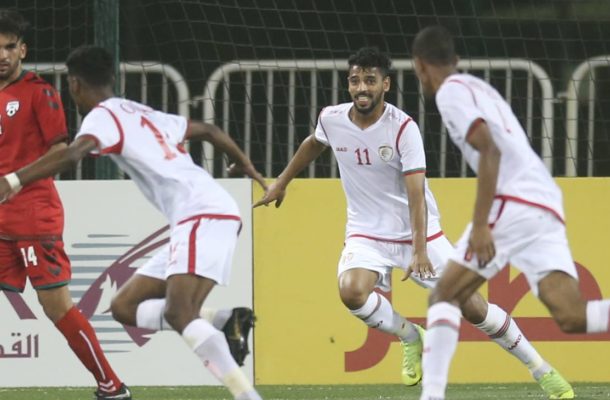 Doha: Oman kept their AFC U23 Championship Thailand 2020 qualifying campaign on track, recording their second successive narrow win with a 2-1 victory over Afghanistan on Sunday.


Second half goals to Ahmed Al Matroushi and Muhsen Al Ghassani took the Omanis to six points from two matches, setting up Tuesday's match against group hosts Qatar to potentially decide who takes the group's direct qualification place in Thailand.

Afghanistan's defeat leaves them without a point after two matches, meaning their qualification hopes could be dashed following Qatar's match against Nepal later on Sunday.

As in Friday's opening 1-0 win over Nepal, Hamed Al Azani's side were largely in control early, but several missed opportunities meant Oman were unable to capitalise, with Afghanistan goalkeeper Faisal Hamidi making an excellent stop to deny Salaah Al Yahyaei in one of the standout moments of the first half.

Oman's breakthrough came in the 56th minute, when Al Matroushi got on the end of a clever and well-rehearsed corner kick routine to score with a low drive, and they doubled their lead through an Al Ghassani penalty kick after Hamidi committed a foul just three minutes later.

Afghanistan found a glimmer of hope when they were awarded a penalty of their own, with captain Ahmad Haydary finding the back of the net with 13 minutes remaining, but an equaliser wasn't forthcoming, leaving Oman to celebrate a hard-fought win.