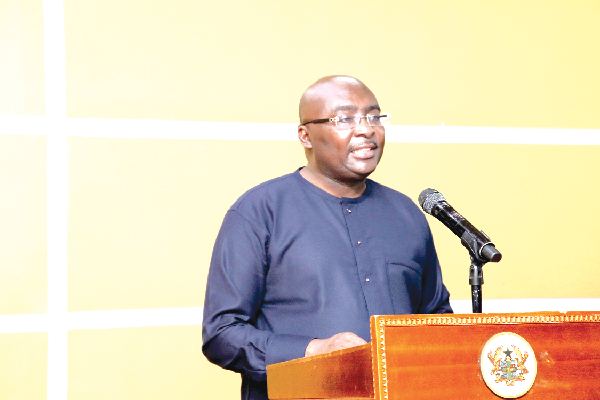 A malicious plot by a Minister in the current NPP government to use selected journalists to malign Vice President Dr. Mahamudu Bawumia, has been exposed.

The Minister, who intends to contest as flagbearer when the NPP opens nominations for the party's 2024 Presidential ticket, and his team, see Dr. Bawumia as a major stumbling block to his desire and has thus hatched a plan in earnest to vilify the the Vice President.

In a confidential meeting held at the Buka Restaurant in Osu, Accra, on Saturday, agents of the Minister took carefully-selected journalists through an elaborate, but vicious strategy aimed at attacking Dr. Bawumia to destroy his image and his strong potential as the obvious heir to President Akufo-Addo’s mantle as the next NPP leader, and possibly Ghana's President.

The Minister's aides told the assembled journalists how they were seriously worried about the increasing popularity of Dr. Bawumia in the NPP, and the need to curtail his meteoric rise.

To achieve that, the Minister's aides suggested a number of destructive measures to the assembled journalists. One of the strategies is to play tribal and religious cards by hitting out at the Vice President as coming from minority groups in the NPP party. On this, the would-be mercenary journalists were also schooled on how they will project their paymaster as coming from a majority group within the NPP and why he should be elected to lead the NPP instead of the Vice President, to continue with the NPP's tradition.

The journalists were also told to link every economic issue to Dr. Bawumia and brutally attack him on that.

The most frightening proposal to the journalists was a plan to attack and downplay the positive effects of every policy by the NPP government which Dr. Bawumia has spearheaded. Among those named included government's flagship digitization drive and the sinohydro project.

Like the tribal and religious agenda, the journalists were told to go back to the Kuffour era and highlight some initiatives of the Kuffour government and credit the Minister for these initiatives. They were also asked to constantly project this Minister-Presidential hopeful, as the main person behind every initiative of the current government under his ministry.

THE LEAK
At least five journalists who were part of the meeting, and were shocked by the depth of the vicious plan to destroy Dr. Bawumia's works for the Akufo-Addo government, have revealed details of the meeting, including all participants to some senior members of government.

Participants included some lejournalists and producers from media houses, mainly from Accra.

Interestingly, some of the journalists and producers were from media houses perceived to be sympathetic towards the opposition NDC.

Similar meetings have also been held in other parts of the country for the same reason.

The NPP will have a new flagbearer for the first time in 16 years for the 2024 Presidential elections, following the exit of President Akufo-Addo.

Vice President, Dr. Mahamudu Bawumia is tipped by many as the clear favourite to win the NPP flagbearership race.