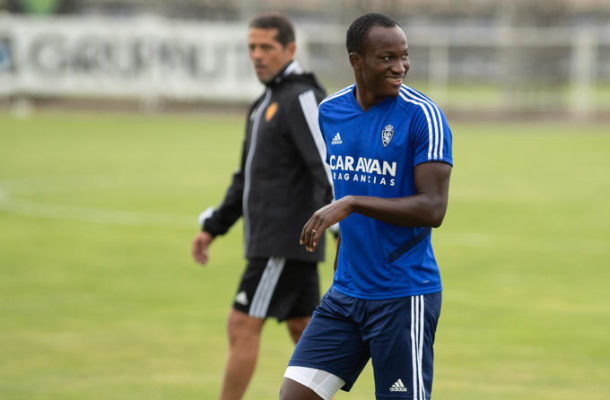 Ghanaian international Refael Dwamena's hopes of returning to the football looks possible after beginning a light routine exercise that has put him in good shape.

The  24-year-old is not giving up on his return to the turf and has begun a routine exercise under the guidance of medical experts, according to a report by eldesmarque.com

This season can be considered as one of the most bumpy in the history of Real Zaragoza as the Ghanaian found himself   most complicated moments  in his career.

The attacker suffered a heart failure, which threw to his return to professional football  in limbo.

Doctors advised the 24-year-old to put his career on hold for some time, a situation which also forced his Club Real Zaragoza to prematurely terminate his contract.

For this reason, the striker tried to search among all possible solutions and was finally operated on at the Miguel Servet University Hospital in Zaragoza , where a device known as DAI (Implantable Automatic Defibrillator) was implanted, which tries to protect the player in case of the appearance of severe arrhythmias.

An intervention that took place in the middle of last January and that allowed Raphael Dwamena to return to the Sports City to exercise with a routine close to that of the rest of the components of the Real Zaragoza squad , working in the gym under the guidelines of the physical trainer Javier Chocarro and the recuperator Andrés Ubieto .

The report described it as "A routine that now undergoes a break but, surely, the striker will continue at home with discipline, ready to contradict all the voices that considered him retired".