Rawlings and Kufuor are both hypocrites – Part 1 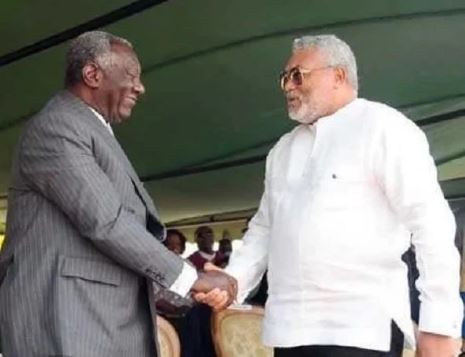 As far as I have been able to glean for nearly 40 years of studiously following the Ghanaian media, when it comes to the subject of “hypocrisy,” former Presidents Jerry John Rawlings and John Agyekum-Kufuor are definitely on the same page and paragraph in my fairly extensively researched book. The book of my studious observation of Ghana’s political culture and landscape, that is. So I was not the least bit impressed to read news reports about these two veritable political clones virulently trading accusations vis-à-vis who was the hypocrite and who was the honest to the heavens Ghanaian leader (See “A ‘Hypocrite’ Like You Must Shut Up About Integrity – Kufuor to Rawlings” MyNewsGh.com / Ghanaweb.com 11/1/19).

As far as I can vividly recall, it was Mr. Agyekum-Kufuor who initiated the politics of downright hypocrisy when the latter decided to join the Rawlings-led junta of the Provisional National Defense Council (PNDC) in 1982, in the immediate wake of the overthrow of the Dr. Hilla “Babini” Limann-led democratically elected government of the People’s National Party (PNP), in what Chairman Rawlings, then 33 years old – if memory serves yours truly accurately – claimed to be the formation of a Government of National Unity.

This decision to work under the junta of Chairman Rawlings, on the part of Mr. Agyekum-Kufuor, was abjectly and scandalously hypocritical because not only did he claim to staunchly subscribe to democratic tenets and principles but, even more significantly, the Popular-Front Party’s Member of Parliament for Atwima-Nwabiagya, in the Asante Region, had only recently served as Deputy Parliamentary Leader to Mr. Kwaku Baah, who was the substantive Parliamentary Minority Leader and the de facto Leader of the Popular-Front Party (PFP), with Candidate Victor Owusu’s having lost the presidential election runoff to Dr. Limann.

You see, a very principled politician and leader who claimed to be an unreserved believer in democratic governance, or the rule of law and order, would not have so hurriedly and facilely succumbed to the garish wiles of the much younger Chairman Rawlings like a professional commercial-sex trader or a gigolo, in New York City street parlance.

And on the latter count must also be recalled the fact that the first prominent politician and leader to be called upon by the novice junta leader, Mr. Victor Owusu, had roundly rejected such overture and promptly counseled Chairman Rawlings to immediately relinquish the illegitimate usurpation of the democratic reins of governance – no pun intended here, of course – and return to the barracks, so as to ensure that either President Hilla Limann would complete his remaining term in office or have fresh elections called in order for the next government to be democratically and constitutionally constituted.

Mr. Agyekum-Kufuor would later claim that he had, indeed, been seconded at an emergency meeting by the leadership of the Popular-Front Party to represent the collective interests of the PFP in the so-called Government of National Unity that Chairman Rawlings and his PNDC co-coup-plotters claimed to be in the process of establishing. It would later turn out, according to the public testimony of a former lecturer of the Kwame Nkrumah University of Science and Technology, Kumasi, by the name of Mr. Antwi-Boasiako, if memory serves yours truly accurately, that, indeed, the sort of meeting that Mr. Agyekum-Kufuor hinted at had actually occurred. However, according to Mr. Antwi-Boasiako, absolutely no decision had been taken to have the future President John Agyekum-Kufuor represent the interests and aspirations of the PFP on the Board or Council of National Unity that Chairman Rawlings and his Abongo Boys were poised to establishing.

Mr. Agyekum-Kufuor would end up serving as the Rawlings cabinet appointee or Secretary in Charge of Local Government and Rural Development for a little over seven months. For yours truly, however, the most painful moment of this era had to do with the fact that Mr. Agyekum-Kufuor had not mustered the courage of his convictions, if he had any at the time, to promptly resign from his cabinet position with the PNDC in the wake of the savage abduction and brutal slaying of the three Akan-descended Accra High Court Judges, namely, Justices Cecilia Koranteng-Addow, Frederick Poku-Sarkodie and Kwadwo Agyei Agyepong. It was inescapably clear that the assassination of these three Accra High Court Judges and the retired Major of the Ghana Armed Forces, Mr. Samuel Acquah, had been a deliberate act of ethnic cleansing.

But, of course, an equally hypocritical edge or angle to this story was the vehement and very public denial by Chairman Rawlings that the government of the Provisional National Defense Council knew absolutely nothing about the legally and morally untenable abduction of the slain High Court Judges and the Ghana Army Major and the equally morally reprehensible barbaric slaughtering of the judges.