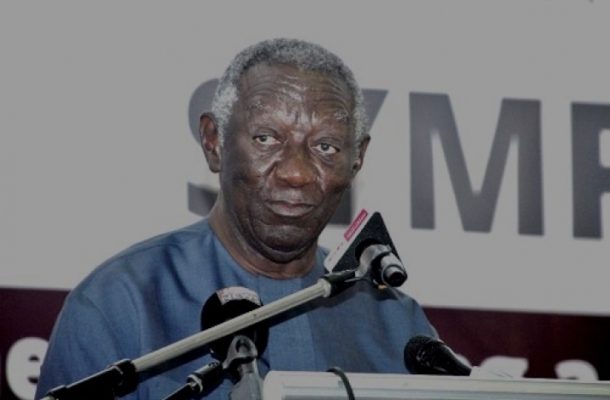 Former President John Agyekum Kufuor has responded to criticisms by former President Rawlings that he demeaned Dr Kwame Nkrumah's legacy in his time as president.

Former President Kufuor has described as baseless criticisms from his predecessor,  Jerry John Rawlings, that he demeaned the legacy of Ghana’s first President, Dr Nkrumah, during his tenure.

According to him, he only fulfilled the dying wish of Dr Nkrumah's wife, Fathia, and that could not have by any means demeaned his legacy.

Former President Rawlings, in an interview on Tuesday, criticised the presidents who have come after him for their poor handling of the Kwame Nkrumah Mausoleum.The harshest of the criticism went to his successor whom he accused of desecrating Dr Nkrumah's graveyard by burying his wife in the same grave as him. This gesture from Mr Kufuor, which he described as pretentious, turned the mausoleum into a family graveyard, effectively demeaning Nkrumah's legacy.

“Many years later when Dr Kwame Nkrumah’s wife, Fathia Nkrumah, also died former President Kufuor laid her coffin in the same dugout where Nkrumah had been buried and he feigned mourning her and we all fell for it and joined in the mourning without handkerchiefs wiping our tears. From that moment, that National Monument to honour that man became a family graveyard. Do you see how his grave was desecrated?", he said.

He argued that "Ex Presidents J. E. A. Mills and John Mahama claim they’re Nkrumaists, you have chopped into the man’s name. All these were done before your eyes while in power and they didn’t see?”

“The compound is big, you could have dug a hundred and one holes and put Madam Fathia also there. Build a three-story building there, you did not have to do that under the same monument under which Dr Nkrumah was".

But in a swift response, Mr Kufuor's spokesperson, Mr Agyekum, was emphatic that his boss did not err in granting the last wish of Madam Fathia.

Explaining further, he said Ghana's first ever First Lady, while on her sick bed, intimated to former President Kufuor who had called on her during a visit to Egypt that she wished to be buried beside her husband and he granted her wish.

According to Mr Agyekum, it would not be a surprise that Mr Rawlings would have turned down Fathia’s request because of his unsympathetic nature.