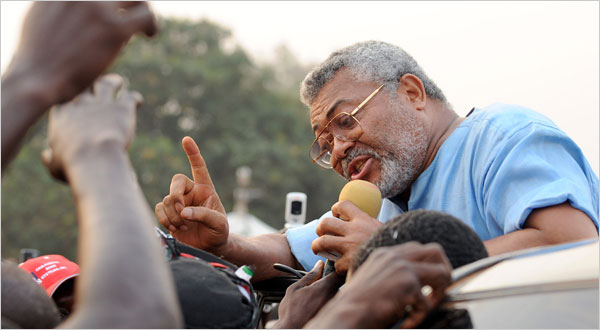 Contrary to what has long been keyed in the minds of Ghanaians that the former President Rawling flew a plane under the Adomi Bridge, it has emerged that the Flight Lieutenant did no such thing.

His revelation brings to rest the raging argument as to whether the former military leader did the unthinkable by flying under the bridge that was refurbished some years ago.

Speaking on the recent incident involving one of Ghana Air Force’s planes on Kofordua-based Dadi FM monitored by MyNewsGh.com, the retired pilot insisted that the 1979 story of Rawlings’s exploits with a plane under the Adomi Bridge was completely untrue.

The former President worked as a pilot with the Ghana Armed Forces before staging a coup in 1979 and later in 1981. Subsequently, he became an elected President in 1993 and rules till January 2001 when he handed over power to the NPP’s John Kufuor.

On the recent incident of a plane overrunning its apron, Commodore Pumpuni said there is the need for a detailed investigation so as to ascertain the cause of the incident, adding that if nothing really unusual had happened, the pilots should have been able to avert the incident.