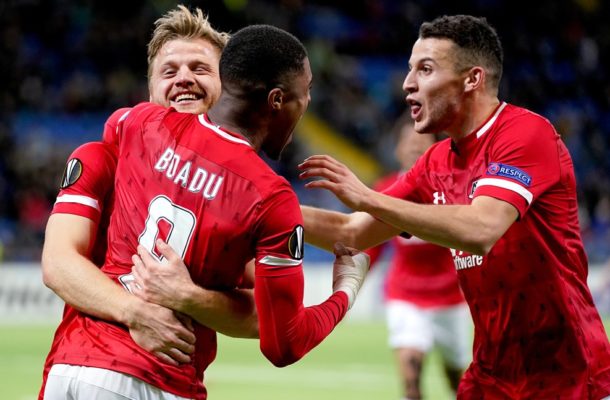 Ghana target Myron Boadu simply cannot stop scoring for his club side AZ Alkmaar, the 18 year old is having a break through season for his Dutch club.

Boadu was on the scoresheet as AZ Alkmaar comfortably walloped Astana 5 nil at home in their Uefa Europa league group L encounter on Thursday.

The Ghana target opened the scores in the 29th minute before goals from Frederick Midtsjo in the 52nd minute and Oussamma Iddrisi made it three nil.

Pantelis Hazdiakos later added a fourth goal before the Dutch born Ghanaian Myron Boadu put the icing on the cake with the fifth goal.

Boadu has scored 4 goals and tallied 2 assists for the club in the competition.

He has also netted 7 goals in 11 Eredivisie matches this term in total he has scored 13 goals across all competitions this term.