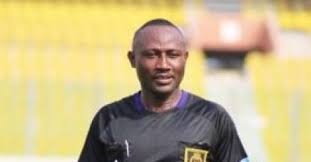 Referee Samuel Sukah has been handed a four-match ban for his controversial penalty decision in the Ebusua Dwarfs-Berekum Chelsea clash, according to reports.

Sukah awarded Dwarfs the penalty which helped them to win 1-0 at the Cape Coast Stadium on Match Day 1.

Winger Alhaji Mustapha dropped like a stone inside the box but Sukah who was more than 20 metres away from the action pointed to the spot.

The Ghana Football Association Disciplinary Committee has decided to punish the referee with a four-match ban.

He is expected to return for the week 8 fixtures.