Resign or be impeached – PNC to EC C’ssners 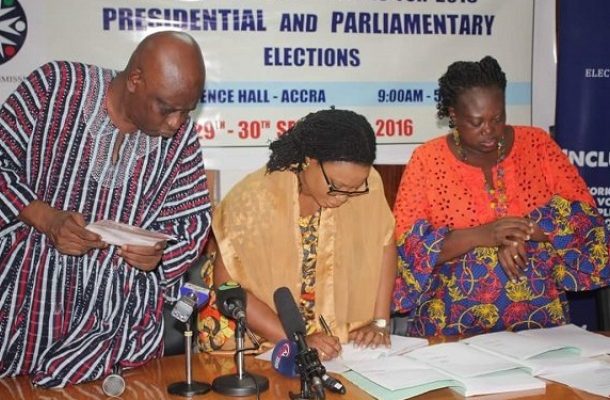 The People's National Convention (PNC) has said the current Commissioners of the election management body in Ghana, the Electoral Commission (EC), cannot be trusted to do a good job ahead of the 2020 presidential and parliamentary elections.Therefore, the party has asked the Commissioners to resign or risk being impeached.According to a statement signed by the party’s National Treasurer, Akane Adams, the conduct of the EC ahead of the 2016 polls shows that the commissioners cannot handle the next general elections.The position of the PNC comes after the chair of the EC, Mrs Charlotte Osei, appeared before the Chief Justice at the Supreme Court on Monday, December 11, after the President forwarded a petition by Forson Ampofoh and Godsway Dzado, both drivers at the EC office, for her impeachment in relation to alleged corruption and mismanagement.Her two deputies, Amadu Sulley (in charge of operations) and Georgina Amankwaa (in charge of corporate services) are to also answer for their alleged roles in the disappearance of some GHS480,000 from the EC’s Endowment Fund, among other allegations.The PNC’s statement said: “The conduct, posture and relationship amongst the EC commissioners and towards political parties prior to and after the 2016 elections could be liking to that of an Iraq - Iran war or better still the recent tension between America and North Korea.“The Electoral Commission is the only key and sensitive institutions of state mandated by law to conduct free, fair, peaceful and transparent elections and the citizens expect nothing less, we are therefore not safe if the EC commissioners themselves are not in working harmony and in peace and also lack transparency amongst themselves at the commission.“The decision to increase filling fees over 100% in the 2016 elections was a rubber stamp, autocratic and arrogant posture by the EC against the collective objectives of IPAC to allow a level playground for all political parties prior to the 2016 polls.“The public pronouncement to disqualify the nominations of some selected political parties even before nominations were opened prior to the 2016 elections was very immoral and unofficial on the part of the EC Chair.“The public acrimony, fights, accusations and insults against each other by the EC commissioners just after the 2016 polls should be enough for an impeachment!. Indeed, if impeachment is too strong in our ears, then we kindly, humbly and respectfully ask the EC Chair and her deputies to step aside to avert an impeachment!”Source: ClassFMonline.com