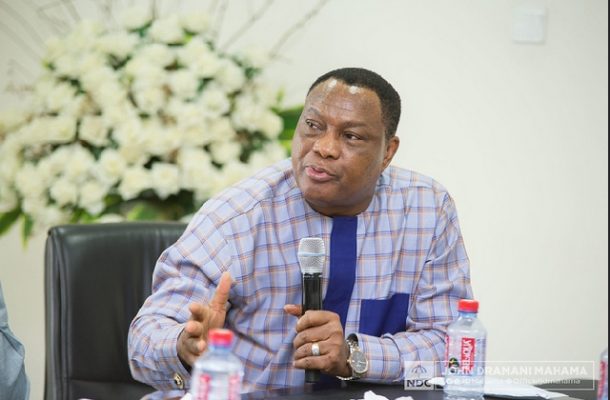 Revered Ghanaian clergyman, Rev Sam Korankye Ankrah has prayed for death for any politician around former President John Dramani Mahama whose intention is to amass wealth should Mr Mahama and the National Democratic Congress (NDC) win the 2020 elections.

The Founder and leader of the Royal House Chapel also prayed against persons "without good spirits" to be turned away from the flagbearer of the NDC.

Rev Sam Korankye Ankrah made the prayers during a church service at his church on Sunday, 15 September 2019..

“Anybody around John Mahama who hasn’t got good spirit, who is coming to destroy this nation and they are also coming to grab and chop, Father, don’t let them see December 2020,” the Apostle General prayed.

Rev Korankye Ankrah further advised his congregants who are political to heed the call of the spirit before they decide who they vote for in the 2020 elections.

“If you are here and you are consumed by political party colours, today, I deliver you in the name of Jesus. [At the] next elections, we are not going to go party politics anymore, we are going to go highly spiritual, what the prophet says, that’s where you’ll go,” he said.

Mr Mahama and the NDC on Wednesday, 11 September 2019 visited the Ghana Pentecostal and Charismatic Churches (GPCC) of which Rev Korankye Ankrah is a member.

The visit formed part of the NDC’s consultative meetings with various stakeholders ahead of the development of the party's 2020 manifesto and campaign for the general elections.