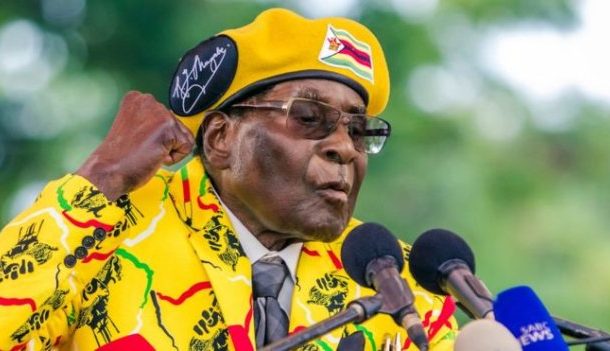 Mr Mugabe, who died aged 95 last week, led Zimbabwe for nearly four decades until he was ousted by a coup in 2017.

"Imagine people you trusted - people that were guarding you, looking after you - [turning] against you," Leo Mugabe said.

"He was very bitter and it dented his legacy," he told the BBC from his uncle's rural home.

"It was not an easy thing for him to take," he added.

Initially praised for broadening access to health and education for the black majority, Mr Mugabe later used violence against his political opponents and presided over Zimbabwe's economic ruin.

He was removed from office after he fired his deputy, with many fearing he was preparing for his wife, Grace Mugabe, to succeed him.

His former deputy, Emmerson Mnangagwa, then became president after the army intervened and forced Mr Mugabe to step down.

The long-serving president's legacy has been the subject of fierce debate since he died.

When will the funeral take place?

Mr Mugabe's death at a hospital in Singapore on Friday followed a long illness. He had been receiving medical care in the city since April.

Close relatives and government officials have travelled to the city and his remains are due to be returned to Zimbabwe on Wednesday.

His body is expected to be taken to his home village, which is about 80km (50 miles) west of the capital Harare, for an overnight wake.

His official funeral will take place on Saturday at the 60,000 capacity National Sports Stadium in Harare, according to government officials.

But there has reportedly been disagreement over where Mr Mugabe will be buried.

Some of his relatives want him to be buried at his rural homestead in the village of Kutama in Mashonaland West province. But government officials have pushed for a burial at a shrine near Harare.

Most of Zimbabwe's national heroes - those who fought against white-minority rule - are buried at the Heroes' Acre shrine just outside of the city.

"The [traditional] chiefs will bury him on Sunday, where I don't know," Leo Mugabe told AFP news agency on Monday.

If Mr Mugabe is buried at his rural home, it would represent a final snub to the comrades he believed betrayed him, the BBC's Shingai Nyoka in Harare says.

Who was Robert Mugabe?

He was born on 21 February 1924 in what was then Southern Rhodesia - a British colony, run by its white minority.

After criticising the government of Rhodesia in 1964 he was imprisoned for more than a decade without trial.

Once released, he headed to Mozambique, from where he directed guerrilla raids into Rhodesia but he was also seen as a skilled negotiator.

Political agreements to end the crisis resulted in the new independent Republic of Zimbabwe.

From war hero to resignation

With his high profile in the independence movement, Mr Mugabe secured an overwhelming victory in the republic's first election in 1980.

But over his decades in power, international perceptions soured. Mr Mugabe assumed the reputation of a "strongman" leader - all-powerful, ruling by threats and violence but with a strong base of support. An increasing number of critics labelled him a dictator.

He famously declared that only God could remove him from office.

He was forced into sharing power in 2009 amid economic collapse, installing rival Morgan Tsvangirai as prime minister.

But in 2017, amid concerns that he was grooming his wife Grace as his successor, the army - his long-time ally - turned against the president and forced him to step down.