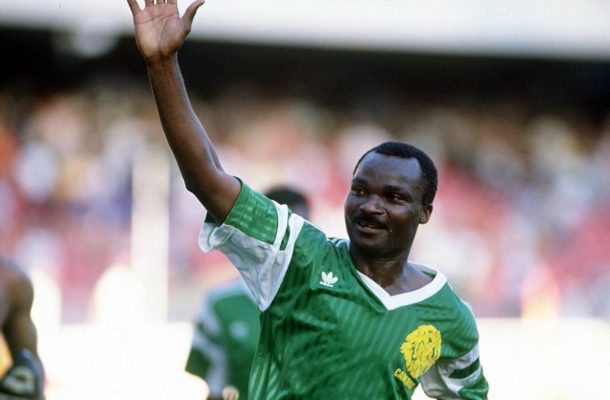 Cameroon great Roger Milla has told AFP that he never received the credit he deserved for his World Cup goalscoring exploits.

Milla, lured out of retirement at the ripe old age of 38, left an indelible mark on the 1990 finals in Italy.

Considered an intriguing addition to a Cameroon team expected to head home after the group stages, Milla turned the tournament, and the fate of African football, on its head.

Following a shock 1-0 win over Argentina, Milla came off the bench to score twice in the final minutes of a 2-1 win over Romania, his second a fierce strike from the right side of the area.

After a 4-0 drubbing by the Soviet Union, Milla, again, stepped up to the plate.

He came off the bench again to hit his second brace, in extra-time, to secure a 2-1 win over Colombia that sent Cameroon into the last eight, the first African side to make it to the quarter-finals.

In Russia, Cameroon will be absent but Milla can take pride from the presence of a record five African teams — Egypt, Morocco, Nigeria, Senegal and Tunisia  — in the 32-nation World Cup starting Thursday.

Thoughts of that strong African contingent got Milla reflecting on those heroics 28 years ago.

“The most beautiful goal was my second against Romania,” he told AFP.

“I hope you’re going to write about it, because no other player has scored a goal like that!”

He added: “I don’t know why you (the media) don’t talk more about Africans. For me, it’s because of racism!

“If a Brazilian, German or Frenchman had scored a goal like that, you would burst everyone’s eardrums talking about it.

“But since it was a Cameroonian, a black player, it was hardly talked about. Still, Europeans told me that it should be rated among the world’s best.”

Each of Milla’s strikes were followed by what would become his trademark celebration — running to the corner flag and shimmying his hips from side to side as if dancing to his own personal tune.

In the run-up to Italia 90, the striker who had played for French clubs Bastia and Saint-Etienne had been anticipating a life of retirement in the sun on the French Indian Ocean island of Reunion.

But a last-minute request by Cameroon president Paul Biya, who urged him to grab his boots and get on a plane to Italy, made sure Milla, and African football, would never be the same again.