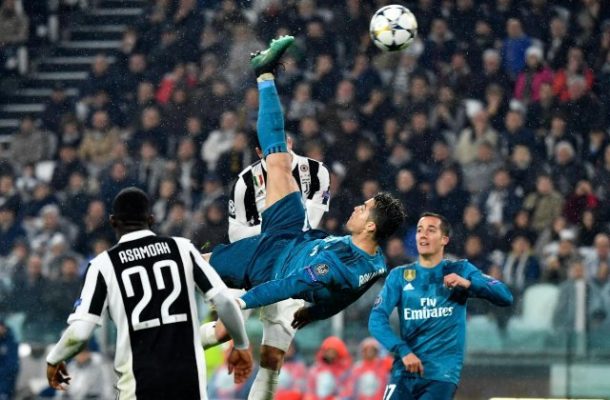 Cristiano Ronaldo scored twice, including a stunning bicycle kick, as Real Madrid took control of their Champions League quarter-final against Juventus with a convincing first-leg win.

The Real forward made history with his opener when he prodded home Isco's cross - becoming the first player to score in 10 consecutive Champions League games.

The Italian side had chances to equalise in a decent first half, although Toni Kroos went close to doubling Real's lead when he hit the crossbar with a 25-yard effort.

Then came one of the great Champions League moments. Dani Carvajal lifted a cross to the Portuguese, who soared in the air and sent a flying acrobatic kick past Gianluigi Buffon, who had no chance.

Such was the brilliance of the strike that Juventus fans stood up to applaud the goal that probably ended their hopes of going through.

It got even worse for the Turin side, who lost last year's final to Real, as Paulo Dybala was shown a second yellow card for a high boot in the best of Carvajal.

And Marcelo effectively booked Real's place in the last four when he played a one-two with Ronaldo before scoring from close range.