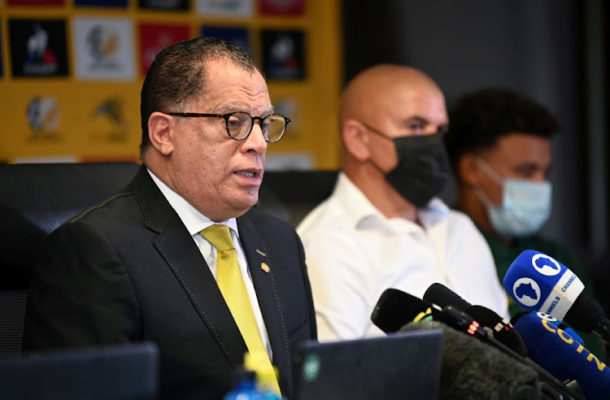 President of the South African Football Association(SAFA), Danny Joordan has questioned why FIFA has not come out with the reasons for the delay in announcing a verdict on their protest lodged against Ghana.

The Black Stars defeated the Bafana Bafana of South Africa by a lone goal to secure the only slot in group G for the play offs of the 2022 World Cup.

Ghana had a penalty after Daniel Amartey went to ground in the penalty box following a challenge from Rushine De Reuck although it appeared soft there was a nudge in the back of the Leicester City defender.

The Senegalese referee Ndiaye Maguette who was standing just a few meters outside the penalty box swiftly awarded the penalty without any second thought.

FIFA  urged the two Associations that is Ghana and South Africa to present any comments or evidence it deems appropriate latest by 20th November 2021 as they referred the protest to the FIFA Disciplinary Committee who began their work on 23rd November,2021.

According to Jordaan they are not happy with the long silence from FIFA since they promised to announce the verdict on Tuesday 23rd November,2021.

“Fifa issued a statement saying they would give us a decision on November 23. What is the date today? It is November 28 isn’t it,” Jordaan asked on Sunday.

“The question is why have they [Fifa] not even communicated with us? Why?” he told South African portal  TimesLIVE.

Jordaan suspects that the Fifa officials thought their meeting on Tuesday would be fairly straightforward and they assumed Safa's complaint was solely based on the dubious penalty decision controversially awarded by Ndiaye against Bafana in the 31st minute of the match. Ndiaye bizarrely awarded the penalty after deciding that Bafana's Rushine de Reuck fouled Ghanaian Daniel Amartey inside the area when there was barely contact between the two players.

“They must explain to people around the world that the matter is a lot more complicated than they originally thought and they need more time to consider their decision. Remaining silent for so many days without any form of communication is not the way to go here.

“The fact that they [haven't announced a decision] means there are other issues at play here. We asked Fifa for a thorough investigation [into Ndiaye's conduct]. Other people [who are not South Africans] have come forward and added more information.”

Jordaan said it is interesting to note that after the Ghana Football Association initially dismissed Safa’s complaint to Fifa and elected to attack the South Africans rather than the merits of the case, they have also gone silent.

“The statutes of Fifa say they must protect the integrity of their competitions,” the Safa president continued.

“So I think the matter has become more serious now. Ghana initially said our protest was frivolous. It is really strange that a federation attacks another in the manner they did. It is strange that they held a press conference and they attacked Safa.

“But the thing is we never accused them of anything. We wanted the referee, Maguette Ndiaye, to be investigated.”