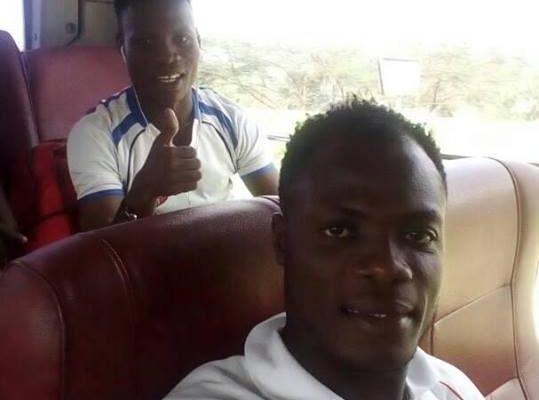 Samudeen desribed Inusah as a soldier

Both Hearts and Kotoko failed to register a goal in the Second leg of the 60th anniversary cup, making the Phobians lift the trophy on 3-1 aggregate scoreline.

Despite the barreness of the game, Inusah who captained the team on the was extolled for his high standard of managing affairs at the back, an action that seem to have mesmerised Samudeen.

In a praise-filled post on his facebook page, the slippery midfielder hailed the return of Musah, who missed in action in the greater part of last season, saying "the real defence minister is back".

"That the man, the defence minister who will always make u understand the difference between a police officer and a military man, inusah musah is my soldier buh one thing I hate abuh him is that he doesn't knw how to pamper a child kraaa, he'll match u boot to boot and when u misbehave then he'll show u the exit door....I love my soldier, the last man standin, the real defence minister is back, I salute u ooo oga inusah," Samudeen wrote on his facebook wall.

The former Tudu Mighty Jets defender, who is in his 3rd season with the former African Champions, returned to the field in the latter part of last season and made one appearance for the Phobian in the Semi Final match aginst Wa all stars at Obuasi, a match the Phobians won by 2 goals to 1.

But he was left out by Coach Nutall in the final in Tamale, where Kotoko won by 3-1 with Saddick scoring all the 3 for his team with defender Vincent Atinga as his marker. 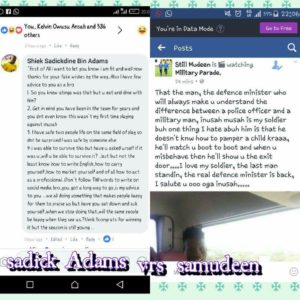 The former division one best player triggered a war of words on  a social media with Kotoko's Saddick Adam's, after sending him a recovery wishes filled with wisecracks.

Samudeen in  his good will message to Saddick,  sent a  rhetorical question to the striker, who grabbed a hatrick in the FA Cup final, asking him whether he now realise the "difference between inusah and atinga"

"buh I guess now u knw the difference between inusah and atinga...lol, ” he wrote

But what started as post-much trolling took a differnt dimention when Saddick reacted by describing Samudeen's well-wishing statement as "fake wishes" and added that the Hearts of oak midfielder should  "know how to write English".

"First of All I want to let you know I am fit and well now thanks for your fake wishes by the way...Also I have few advice to you as a bro," Saddick said in a response.

"..last but not the least know how to write English, how to carry yourself, how to market yourself and of all how to act as a professional..Don’t follow Twi words to write on social media bro, you got a long way to go, is my advice to you..".

The bunter between the two does not seem to end anytime soon as Samudeen returned to hit back with more provocative statement, describing Saddick as "Mr English " who still needs to "write a good English. 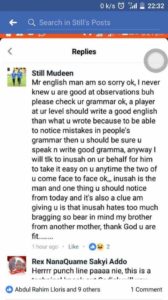