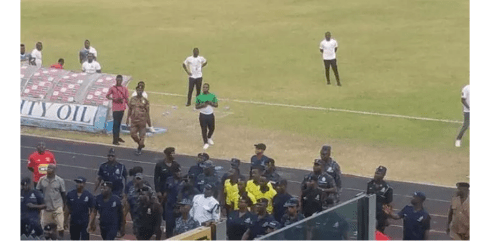 Kumasi Asante Kotoko have been banned temporarily by the Ghana FA Executive Council following the incidents that happened in match day 3 of the the Ghana Premier league at the Baba Yara Stadium in Kumasi.

A group of irate Porcupine Warriors fans threw bottles of water at the referees during their game against Berekum Chelsea when he awarded a red card to Empem Dacosta for off the ball incident, which caused the game to be brought to a halt in the second half.

The events led to the shooting of a Kotoko supporter from a police officer on duty after the Porcupines lost 0-1 to the Bibires at their own backyard in Oseikrom.

The statement from the Ghana Football Association reads.

The GFA Executive Council at its meeting on Monday, January 13, 2020, decided to trigger the provision of Article 14(2) of the GFA Premier League Regulations.

Article 14 (2) of the GFA Premier League Regulations states that: "the GFA may order the closure of any league centre/venue where the safety of clubs, match officials and/or spectators cannot be guaranteed."

The GFA Prosecutor shall prefer charges against any person/party found to have breached any provision of the GFA Regulations or Disciplinary Code.