Schrock: To be part of UAE 2019 is incredible 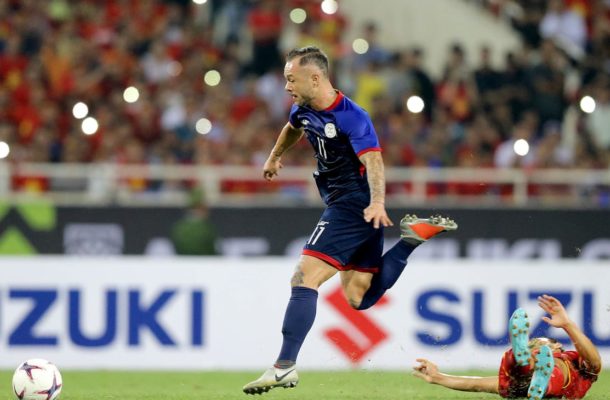 Bacolod: Philippines playmaker Stephan Schrock cannot wait for the Azkals' AFC Asian Cup debut with the continental tournament set to be a career highlight for the Ceres Negros star.


In his career so far, Schrock, 32, has played a part in several historic milestones for Filipino football.

From lining up in the Philippines side that achieved the 'Miracle of Hanoi' to secure a maiden AFF Cup semi-final place in 2010, to turning club side Ceres Negros into a force to be reckoned with in continental club football - winning the inaugural AFC Cup ASEAN Zone in 2017 and then defeating Brisbane Roar in Australia in the 2018 AFC Champions League play-offs.

Despite these milestones, not to mention the various domestic titles won with Ceres, the German-born midfielder insists that should he represent Philippines in their first Asian Cup at UAE 2019, it will be the highlight of his entire football career.

"It’s still hard to believe we’ll be taking part in the competition: it’s like seeing Luxembourg in the European Championship, or the World Cup!" says Schrock.

"Seven years ago, I remember people telling me that in 10-20 years that the Asian Cup would be possible. But the reality was a different one."

"We missed out on qualifying for Australia 2015, after we lost the AFC Challenge Cup final [in 2014], and have had many ups and downs along the way. So to actually be a part of AFC Asian Cup UAE 2019 is unbelievable."

The reward for the Azkals' efforts promises to be a testing one, however, with a tough draw in the group stage that sees them placed in Group C along with Korea Republic, China PR and Kyrgyz Republic.

Nevertheless, Schrock is determined that no opponent will be in for an easy ride when they face the Southeast Asians.

"For sure, China and Korea are big names," he says. "Particularly Korea. I played against Son Heung-min when he was in Hamburg and a few of the other players when they were at Augsburg and Mainz.

"They bring everything. Technically and tactically they are on an extremely high level not only in Asia but world football. But they should be concerned about us, as we have nothing to lose.

"We will be the underdog, for sure, and not many people are betting on us, but we’re not going to make up the numbers. We are fully embracing this unrealistic statement we’re giving to Asia."

Manufactured by the sun and the 3 stars. ??

A post shared by Stephan M. Cabizares Schröck?? (@schroecky) on Nov 27, 2018 at 10:46pm PST "There are no particular teams, or players that I am looking specifically to play against at UAE 2019, but that’s been the same way throughout my career.

"I have no individual milestones in that sense, now that I am in the latter part of my career. If I played last week or next week, the only thing I ever focus on is testing myself to do even better than the previous game.

"Nevertheless, it's definitely the case that this Asian Cup will definitely be the highlight; not even just of my international career but my entire football career in general!"