Serchim Richard Junior: Meet the fast-rising Ghanaian who is making waves in Belgium 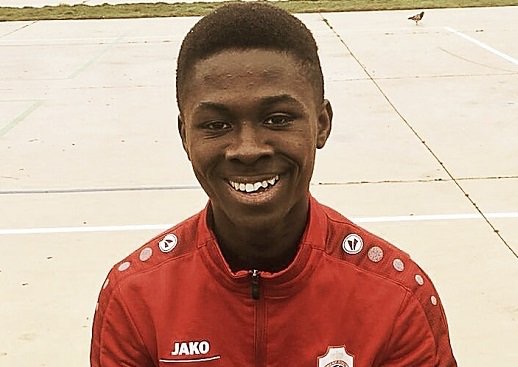 One of the few rising young talents campaigning in the European league today is  Serchim Richard Junior.

The hugely endowed 'goal-scoring machine' may not be a household name yet, but could very soon mushroom into a player of the first water, given his string of imposing performances on the lush field.

Junior, who played for R-Stake, an Accra second division side, now features for Belgian side Kon. Sv Vlug Vooruit in the Voetbal Vlaanderen (second tier league) - where he has banged home 14 goals in 13 games.

With a ravenous desire of playing for the national Under-20 side, Black Satellites, the finely-trimmed player told the Times Sports that he has a lot to offer Ghana.

"It's my aim to play football at the highest level with passion, but playing for my country will be a dream come true because I have so much to offer," he told the Times Sports on Tuesday.

Born in Accra on May 6, 2000, Junior started his career at the Lizzy Sports Complex where he played for Lizzy FC, an academy owned by Marcel Dessailly, a former Chelsea and France captain.

He landed the opportunity to play for his present club in July 2017 after featuring for R-Stake during the Gothia Cup tournament in Sweden as well as the Norway Cup in Norway.

The tournament turned out to be a big success for the young Ghanaian.

"Fortunately for me, I was very impressive in both tournaments such that there were scouts all over chasing my signature," he recalled, adding that he had to settle for his present club because of the great prospects of becoming a big player there.

"They assured to help me push my career to dizzy heights and so far it's been encouraging.

"Indeed, the club believes in me as well as the fans who continue to show me great respect and love. And, this is steadily opening new doors of opportunities for me," he asserted.

The right-footed player is highly versatile and also dazzles at the left wing, right wing, attacking and central midfield positions - with masterly ease.

Known in football circles as Abino (named after a goal-poaching local idol) the prodigious attacking midfielder called on his fans to back with prayers "because I will be next big thing to happen to Ghana football."