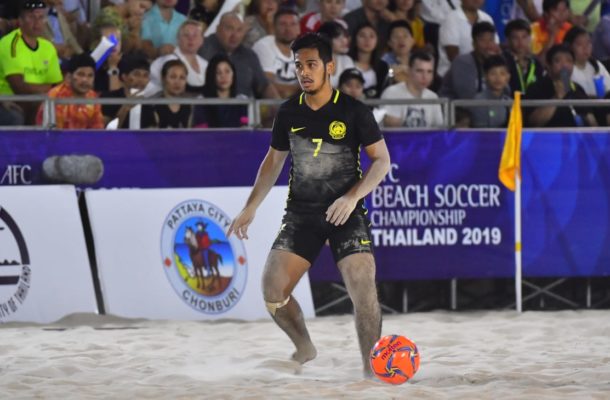 Pattaya: Malaysia are significant underdogs in their AFC Beach Soccer Championship Thailand 2019 quarter-final against United Arab Emirates, but Shafiq Riza Huzair vows his side will give everything they've got against one Asia's leading sides.


The 75th-ranked Malaysians have advanced to the knockout stage for the first time in history, and now stand just two wins away from an unlikely berth at the FIFA Beach Soccer World Cup in Paraguay this November.

But standing in their way is an Emirati outfit who were Asian runners-up in 2017, have five FIFA Beach Soccer World Cup appearances under their belt and currently sit 12th in the global rankings.

Shafiq told the-AFC.com his side is full of respect for their decorated opponents, but said Malaysia would put everything in the make or break quarter-final.

"Okay, we know that the UAE is a very strong team," he said.

"They are a World Cup team, and they were in the World Cup two years ago, but I, and my team; we will fight all the way until the end and try to beat the UAE."

Matchday Two Highlights: Groups A & B

A 5-4 Matchday Two win over Thailand was crucial for Malaysia, but it was the Thais who ended up playing a major role in their progression; beating Afghanistan to send Mohammed Faizal So'od's side through by the narrowest of margins.

That result cancelled out Malaysia's earlier 6-5 loss to Palestine, and while Shafiq appreciates Thailand's neighbourly intervention, he believes his side's performance against the West Asians was a new high watermark in Malaysian beach soccer history.

Matchday Three Highlights: Groups A & B

"Congratulations to my team for qualifying for the next round," he said, "but thank you also to Thailand, because it's their win against Afghanistan that makes us go through the quarter-finals."

"I think we were also very close to winning against Palestine, but I think this is the best game ever for the Malaysian team.

"I think that was the best performance we have ever had."

Reaching the last eight is major achievement for the Southeast Asian nation, and one that underlines a vast improvement on their 2017 showing on home soil; where they shipped 26 goals in four matches, including 14 in a humbling defeat by eventual champions Islamic Republic of Iran.

Shafiq is one of six of the current 12-man Malaysian squad who took part two years ago - scoring in Malaysia's 6-5 loss to Bahrain - and the Pahang-raised talent explained his side's path to the Continental stage.

"This is a partly similar team to two years ago," explained the 25-year-old.

"Most of the team of the team is from Terengganu, and we met and trained together in KL. I play 11-a-side football for a club (Klang Valley United) in KL, but mostly we all like to play beach soccer."

"We also have local competitions and tournaments in our home states and these tournaments are where this team is selected from."

Local football is in the background for now, as Shafiq shares the limelight with global beach soccer luminaries such as Japan's Ozu Moreira and star Iranian goalkeeper Peyman Hosseini.

That dramatic rise may yet reach even greater heights if Malaysia can conjure up two wins, and earn a historic World Cup qualification.

"If we can qualify for the World Cup, definitely, Malaysia will be proud of us."

Malaysia will meet UAE at 19:00 local time on Thursday, with the winners to face either Oman or Bahrain in the semi-finals.