SHAMS Writes: Chief Imam's donation to the Cathedral is deemed a stab in the back of Islam 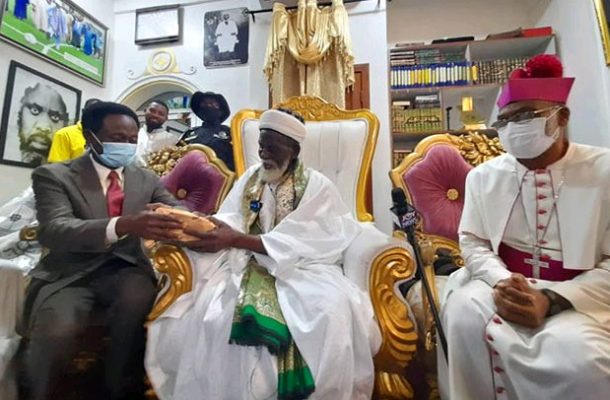 We woke up to a litany of condemnation and criticism against the National Chief Imam following reports on his donation of GHc50,000 yesterday to contribute to the building of Akufo Addo's Cathedral.

Even though very unfortunate to hear such insults on the Chief Imam, it is also important to consider the implication of his actions on Islam as a whole.

Why on earth should the National Chief Imam of Muslims in Ghana contribute money to the building of a church? It really beats my imagination. What best motive went into this decision such that the National Chief Imam would donate a quantum of GHc50, 000, when he could have utilized the money in supporting other philanthropic work that are begging for urgent intervention across the country? In a snap survey, we can estimate over hundred muslims who have completed JHS/SHS and cannot continue to the university and are on the brink of becoming drop outs, due to lack of resources. Many others are in the hospitals seeking a philanthropic intervention to be relieved of their medical bills.

Lest we forget, we have a recent history of discrimination against Muslim Girls who were prevented from observing their obligatory prayers and Fasting on SHS campuses. We have had a running battle with successive governments for a fair deal in the provision of holidays during the Christmas and Eid festivities.

I thought these inherent challenges should have occupied the attention of the Operatives of the Office of the National Chief Imam and not a populist donation for the building of a Cathedral.

Lets even put the religious aberrations aside and assume it was fair per the doctrine of Islam. What about the politics of it?

Today, the Chief Imam who is supposed to remain balanced and impartial to both political parties is seen donating to the development of an Akufo Addo and NPP project. How does he expect the NDC party to view him? How do we defend the Chief Imam if anybody makes the claim that he is an NPP stooge? Quite embarrassing! Isn't it?

It was even rumored that the money was brought by one "Mr. Biggie" from the Office of the Vice President Bawumia to be given to the Chief Imam for the donation. If that is true, it rather worsens the suspicion and further opens the scope of conspiracy against the person of the Chief Imam and the office.
It further brings legitimacy to critical questions people ask, some of which are as follows;

1. Is the Office of the National Chief Imam now an appendage of the NPP party?

2. Is the Chief Imam himself being used by Bawumia for his selfish political ambition?

3. Why didn't Bawumia donate such an amount when he dragged the Chief Imam to Ejura to calm down the people whose relatives have been shot dead by his govt?

4. Why didn't Bawumia consider the Chief Imam when the latter pleded on behalf of the *Yam Market Traders* for an extention of time to settle and move?

This is the most embarrassing irony in our Religio-political history as a country.

In my candid opinion, National Chief Imam's action of contributing to the building of a church was uncomplimentary of Islam and politically, catastrophic.