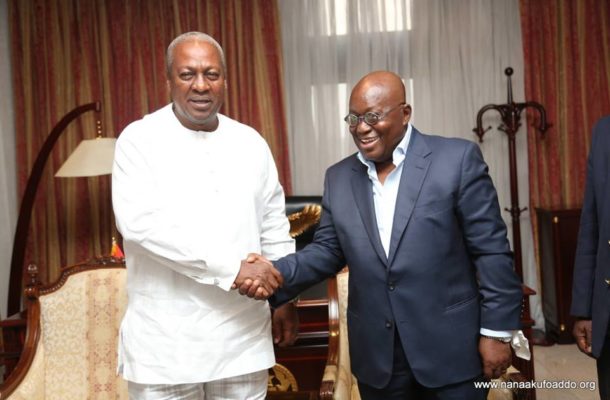 President Akufo-Addo (right) in a handshake with ex President Mahama

It has now become obvious that, some accusations gains innocent people are really a function of what the Sociologists call "An unlived experience" and that indeed is tragedy. Out of ignorance, one is tempted to believe that his burden is the heaviest simply because he had not carried the other person's burden. Even though one could be wearing the best of dresses, he could be tempted to believe that, the colleague's dress is better because he has not experienced that one which is worn by the friend before. One could be eating the most delicious rice but could be tempted to believe the gari-soakings someone is eating could be more delicious. That is simply what I refer to as the temptations of unlived experience.

Ghanaians thought we had the worst of economic conditions under John Mahama, until they tasted that of Akufo Addo! Now I can hear them crying everywhere having been disappointed against the high expectations of Low taxes, Free SHS, Lower Fuel Prices, Lower Prices of food, Lower Import duties from Akufo Addo.

I thought presidents were supposed to provide good infrastructure. But I was told the previous administration provided over 34 Community Day SHS, the Ho Airport, The Tamale Airport, the Ktokuraba Market, the Bio Processing Plant and the Bukom Boxing Arena, District and Regional Hospitals, the University of Ghana Medical Centre(UGMC), the Asphalted Roads just to keep faith with the Ghanaian people. So why was he voted out by the people?

I thought presidents were elected to provide security, and in his resolve to deliver on his mandate, John Mahama recruited over 3,000 police personnel in 4 years, increased the number of police posts, increased their salaries, brought Armed Robbery to the bearest minimum in Ghana in order to avoid the killing of Police Inspectors like it happened at Kwabena in 2020, at Adedenkpo in June this year and other places. Yet Ghanaians thought there could be a better provision. Clear example of exaltation of ''unlived experience'', isn't it? Buying fish that is still swimming in the sea.

With all these phenomenal economic and infrastructural achievements of JM's government, I wonder what he should have done in his 4 year term to avoid the clamour for an ''unlived experience. Ignoring an offer of gold to grope in the dark for a charcoal. Incredible success of political chicanery by the white cladding thieves!

All the same as the Sages say, it was a blessing that in 2016 the NDC lost to give the NPP the opportunity to rule so- that there would be fair comparison. If NPP had not come to power in 2016, we would not have known that, the NDC was the better option. What I have come to learn in life is that, without the existence of black, there will be no white. It is only by the existence of black that, the whiteness of a white colour is noticed.

Again if there were no diseases, medicines would have been rendered useless. So when we were providing Ghanaians with the medicines, they didn't value it bcos they had not tasted a disease(Akufo Addo) before. That is why God introduced a disease(the NPP) for Ghanaians to see the importance of that medicines(John Mahams they had rejected.

Ghanaians will be clamouring for that medicine, especially now that they have been plagued, but unfortunately we may have to live with this catastrophe till JM comes to our rescue again at least, to demonstrate that the clamour for an unlived experience is indeed a tragedy. Thank you.