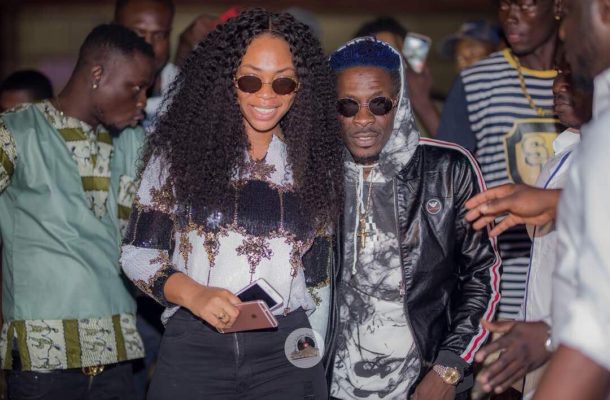 Zylofom media signee, Shatta Wale has accused his baby mama, Shatta Michy of violent behavior as she allegedly slapped him and chased him with a Knife.

In her defence, the Shatta movement queen posted a picture of herself with a bruised forehead she accused her baby daddy of leaving on her and a message stating that the 'Freedom' hitmaker is an ungrateful hypocrite.

Replying the accusation, Shatta Wale stated that whenever they have a conflict, Shatta Michy would feign an accident by either cutting herself with blade or burning herself or sometimes, break bottles and glasses to hurt herself for the outside world to believe he was responsible for hurting her just because of his “way of life I live in the industry”.

He wrote: One of my biggest mistake in Life Is believing people will show me the same love I have shown them..You always cut yourself either with blade or burn urself or sometimes break bottles and glasses to still hurt yourself for the outside world to believe it cuz of the way of life I live in the industry.So people will say and I quote :Abi shatta dierrr the way Ibe basabasa he go fit do am ” my God I worship does not sleep for people like you to tarnish his image...He has never made me lost a battle..The empire is my witness on how I have kept this in me for so long..Woman kakai eeeeiii abeg come back again with better lies CUZ TODAY YOU SLAPPED ME INFRONT OF YOUR OWN MOTHER HOLDING A KNIFE TOO... What a wow !!!! Clap for yourself ..Julio bone etc are my witnesses ..Good night Ghana