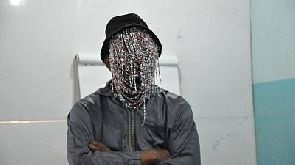 The Member of Parliament (MP) for Assin Central, Kennedy Ohene Agyapong has asked investigative journalist, Anas Aremeyaw Anas to come public on the kind of relationship that exists between him and the wife of late Abuakwa North MP, Joseph Boakye Danquah-Adu.

JB Danquah-Adu was murdered by unknown assailants on February 8, 2016.

Two people, Daniel Asiedu and Bosso are on trial at the High Court after more than a year of committal proceedings at a district court.

A brother of the late MP, Kwasi Frimpong who has been speaking for the family has been demanding the immediate arrest of Mrs Ivy Danquah-Adu as they believe she can offer more leads that would help unravel the mystery surrounding the death of the businessman and MP.

“I am emphasizing that the wife (Ivy Danquah-Adu) should be arrested immediately…she would tell the actual truth behind the murder, the family knows that she knows something about the death…,” he said on Adom FM’s Midday News on Wednesday, 10th May 2017.

Mr Ken Agyapong who is pursuing the investigative journalist is also demanding that Anas comes clear on the sort of relationship that exists between the two.

“If he dares me, I will ask him if he knows Ivy, JB’s wife, and for how long…I will show him pictures from UK and Dubai…I am challenging Anas…,” he said.

The senator has been sparked into his mission to expose Anas in the wake of his decision to publish what the latter claims is corruption in Ghana football but the lawmaker says the journalists is more corrupt than the people he is accusing.