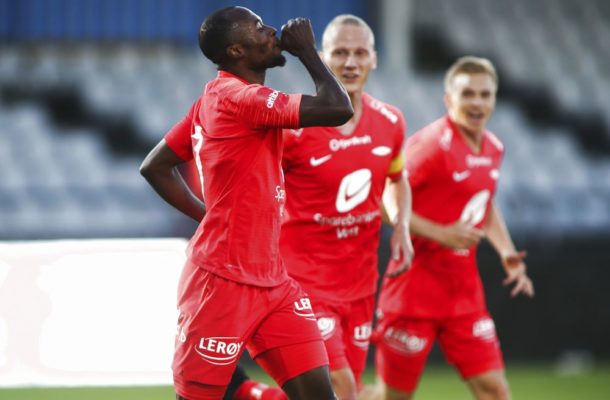 Life smiles for Gilbert Koomson both on and off the field. The winger will soon become a father, which he believes contributes to more goals for his team Brann.

Lately, Koomson has also had to show off a whole new celebration: A thumb in the mouth. Because in three weeks Emilia Koomson will be born.

It is a common celebration among football players when you become a father, explains the Brann player, who is extremely looking forward to the family increase.

"I think about it all the time, and I'm calmer now that I know I'm going to be a father. I work hard and focus on football, and want to be a good father figure for her" he smiles.

Brann bought the Ghanaian from Sogndal in 2018 for about $600,000, according to Transfermarkt.

His most productive season came in the Eliteserien, however, came before the transfer to Brann, in 2016, when he scored three and added up to ten goals for Sogndal.

In front of goal, he was the deadliest in 2017 with seven goals, but the probability is high that this record will be broken this year.

In the two previous seasons in Brann, there have only been three goals, but something is different this year.

"I am more determined and concentrated because of my daughter. I always try to do my best and I want to score as much as possible" he says.

Brann has started the season varying, but well and is in 3rd place in the Elite Series before Wednesday's round. Then Odd is waiting in Skien.

In the previous round of the series, Koomson scored two goals in three minutes, and almost killed the match before the quarter was played.

He explains the sudden form of scoring as follows:

" Football changes from season to season. Just look at Bodø / Glimt, which is doing well now. It is important to focus, then the goals will come"

Last summer there was a lot of noise in Brann. Koomson went out and criticized coach Lars Arne Nilsen, which resulted in him being wrecked for the following match.

The atmosphere in the team is good at the moment and we are ready for every match. The season is just starting and anything can happen. Our goal is to end up at the top, he says offensively.

"We have almost the same team as last year, and everyone does their best for each other. We focus on being a team" he added.