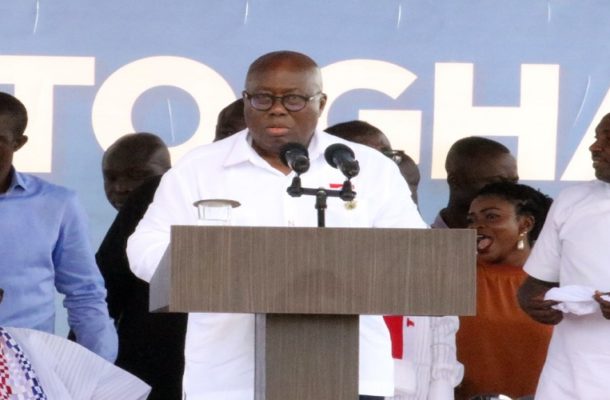 President Akufo-Addo has re-echoed the roadmap for lifting the ban on small scale mining will soon be published.

The yet-to-be published guidelines, according the President,will set the path to “ensure that we do not go back to the bad old days.”

Government is reeling under pressure from the Ghana National Association of Small Scale Miners(GNASS) which insists it must live up to its promise of lifting the ban on small-scale and illegal mining.

However, addressing the New Patriotic Party’s National Delegates Conference held at Koforidua in the Eastern region, Mr Akufo-Addo said: “mining is an essential feature of our economic life, and hence his regime will not stop mining activities in Ghana.

“We’ve always mined here in Ghana. Akufo-Addo cannot stop mining activities. What he can do and is trying to do is to put in place measures that will ensure like our forefathers and ancestors did that mining does not destroy our landscape or pollute our water bodies. Already some of our waters are regaining their purity.” he noted.

Government in April set up a committee to outline the processes to lift the ban placed on Small Scale mining popularly known as “galamsey”.

It was aimed to ensure that those who have acquired proper licenses are able to operate legally.

Government, earlier in 2017, imposed a six-month ban on small-scale mining as part of efforts to end illegal mining and its related activities, which adversely affected the environment, particularly water bodies and forest reserves.

But the expiration of the ban, has prolonged excessively after government failed to make do its promise on the first expiration date in 2017.