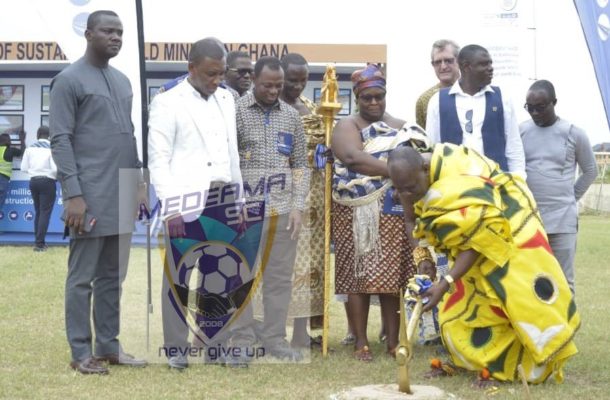 The sod cutting for the redevelopment of Medeama SC’s Tarkwa NA Aboso park took place on Wednesday in the mining town.

The colourful ceremony marks the beginning of work on the GHc65 million ($13 million) 10,000 seater facility.

Top government officials, officials of Goldfields, who are funding the project, Medeama officials and players as well as chiefs and people of Tarkwa attended the event.

Executive vice-president of and head of West Africa for Goldfields, Alfred Baako, cut the sod for the commencement of the project.

Member of Parliament for Kwadaso Constituency, S.K. Nuamah represented the sports minister at the event.

Member of Parliament for Tarkwa Nsuaem, who played a key role in the impending project, George Mireku Duker was present at the ceremony.

“This stadium will be a major boost for the players, coaching staff and the people of Tarkwa, MP Mireku Duker said at the event which was chaired by the Tufuhene of Apinto Divisional Council, Nana Adu Panyi.

“It will help to attract and retain talents as well as providing an excellent base for community engagement and footballing excellence in the Southern part of Ghana that will inspire future generations.”

The stadium will act as an economic invigorator and will contribute to strengthening the image of the mining town.

The revamped venue will also feature a complete seating capacity and involves redesigning the pitch, VIP, media stands, tickets boot, drainage amongst others.

The edifice will also boast an electronic scoreboard running around its perimeter.

Medeama is the most successful team in the Western region after winning the FA Cup twice.

The Mauve and Yellows is a top-four finisher in the Ghanaian top-flight which has fueled the need to revamp their home grounds.