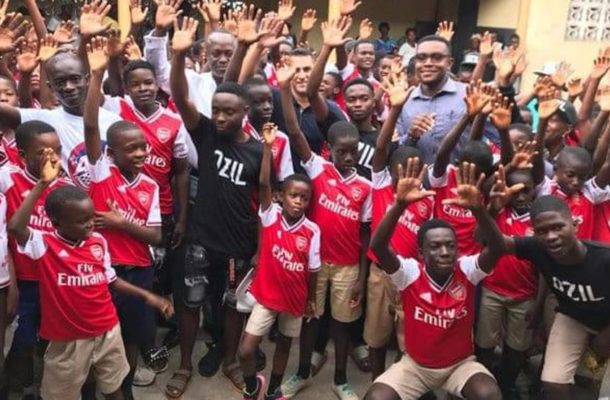 Thomas Partey's future is becoming a matter of concern in Ghana. In principle, the renewal by Atlético de Madrid should be carried out because both the club and the footballer intend for it to come to fruition. However during this time clubs like Arsenal, Manchester United, Bayern Munich and Paris Saint Germain.

Well, in their country they are very clear where they want to see Atlético de ‘5’ next season. His compatriots have chosen Arsenal. In recent days there have been statements from his teammates like Gyasi and Nuhu. A situation that has reached the point that "some fans visited the Partey family to try to convince them to sign with Arsenal," explains Kelvin Ashford Eshun, a Ghanaian journalist who works at Ashh radio, to MD.

Apparently the situation is getting to such an extent that the Atlético player's own followers want to see him in London: “In Ghana, almost all the footballers who are abroad have fan clubs. The Oiri Football Club is one of the fan clubs for Partey. Some of its managers sent a package to Thomas's family containing an Arsenal jersey and a welcome message for Thomas's possible transfer to the London club. This is a way of telling family members to convince their son to join Arsenal. "

From Spain and more from Atlético de Madrid it seems difficult to understand that this situation is being experienced in Ghana. Kelvin gives us some clues: “Most Ghanaians want him to go to the Premier League because that is the most watched league in Ghana. In our country we have a good memory, especially of Essien's career at Chelsea. They think Thomas could be a star in England. "

And it is that from Africa it is difficult for them to understand that Thomas has a clause of 50 million euros currently. A matter for which Kelvin asks this medium who gives us his personal view on the matter: “I feel like you should take your time on any movement. He is being one of Atlético's best midfielders this season. Arsenal is also a good club. Although he shouldn't go to the Premier League but to a club where he would become a much better player. So I would like him to stay in Spain, he has adapted well and is now a better player. Most Ghanaian footballers are very loyal. I am sure that Simeone will make him stay. ”

And it is that in the last hours as we have previously mentioned some of his teammates have encouraged Thomas to leave for Arsenal. Edwin Gyasi told ‘Modern Ghana’ that “with his class he can play for any club. He is that type of player that you will love to have on your team. It can attack and it can also defend. He could play on any team but personally I would love to see him play for Arsenal because Arsenal is my favorite club. ”

A few days before, Kassim Nuhu, a footballer for Fortuna Dusseldorf, had already assured TV3 that “it is his decision because playing for Atlético de Madrid is the same as playing for Arsenal. The two teams always have more or less the same competitiveness in their leagues, fighting for third or fourth place to play in the Champions League. But as we all know, the Premier League is the best league in the world, so if he joins Arsenal, I will be happy for him. ”

So everything indicates that the next few months are going to be key to see what happens with Thomas' future. In Ghana they are clear that they want me to change the scene…