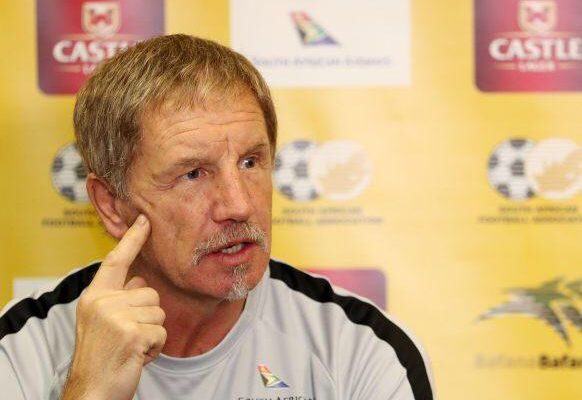 The Bafana Bafana coach Stuart Baxter says he would quit his national team coaching job if South Africa fails to qualify for the 2019 African Nations Cup.

South Africa will play Libya in their last match where they need one point to qualify for the Afcon, which will be held in Egypt this year.

Bafana Bafana remain unbeaten in their group as they hope to qualify for the last Afcon taking place later this year.

Stuart Baxter said the South African Football Association (Safa) would not be forced to pay him if they fire him before his contract expires.

Baxter said in his first stint as the Bafana Bafana coach, he left without money to release him from his contract.

Baxter said at a press conference: “We all have to be happy with it, not only the FA we may win and everybody goes bananas. We beat them 3-0 but then in my heart of hearts I know that I can’t do it anymore so then why stay. But the other way round we don’t get the result that we want but we see that we are on the right path and I’m convinced then I will say look I will stay if you want. So all things are equal there but of course, if we don’t qualify I will put my hat there and say listen if you want me to go I will go.

“Also‚ if I can’t do the job here, if I think that we are not moving forward in the pace we want because of certain things and I just can’t do it‚ I will also walk. Even if they want me to stay.”