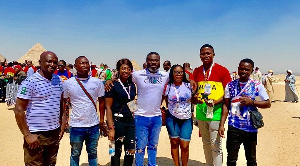 Due to the short break in the AFCON 2019 tournament to make way for teams to prepare ahead of the Knockout stage, Sports Tourism took centre stage as the Egyptian Tourism Ministry used the opportunity granted by the biggest continental showpiece, to let other African fans have access to some interesting tourist sites such as the Alexandria Bibliotheca, a modern project based on reviving the ancient Library of Alexandria, the River Nile Cruise and the Great Pyramids on Wednesday, Thursday and Friday.

The Tourism industry in Egypt maximized the Three-day break period to a great deal of advantages.

At the entrance of the Pyramids of Giza on Thursday, I had the privilege of riding in the bus of the Guinean supporters who had come to tour the Pyramid Site.

Giza, 20 km southwest of Cairo, has several remains from the 26th century BC such as temples and monuments to pharaohs including the Great Sphinx, and the Great Pyramids of Giza. The Pyramid is ranked as one of the Seven Wonders of the World.

South African fans, as well as other members of their backroom staff, were also around on Thursday, touring the Pyramid and other interesting sites in the area.

The tour guide informed us that, Benin and Morroco FA officials had also booked the place a day before.

Egypt is one of the most historically prominent countries in the world with so much tourist sites that attracts over 20 million visitors annually.

The AFCON tournament provided an opportunity for other African countries who have qualified and even fans from across the continent to take a tour of the ancient sites in the country.

As part of the AFCON arrangements, all Africans were allowed to enter the Pyramid Sites free of charge, once they show their passports at the entrance.

The Ghanaian fans who visited the Pyramid on Thursday, as part of the AFCON 2019 Sports Tourism, were the 13th National Team supporters to have visited the site in the course of the AFCON season.

Meanwhile, Egyptian football giants, Al Ahly invited journalists from across Africa to their Headquarters on Wednesday to take a familiarisation tour as well as see historical archives and learn about the administrative structures of the African Club of the Century.

The AFCON 2019 action resumes on Friday (July 5) when the first two games of the round of 16 are played. Two games will be played on the 6th, 7th and 8th to determine the eight quarter-finalists.