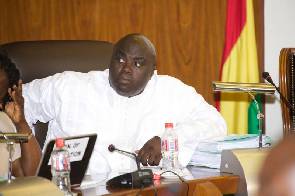 Chief of Staff Julius Debrah and his protégé, Margaret Ansei, who is the governing National Democratic Congress’ parliamentary nominee for the Suhum Constituency, must stop instigating violence in the area or face a square fight, Member of Parliament (MP) for Nsawam/Adoagyiri Frank Annoh Dompreh has warned.

According to the legislator who belongs to the main opposition New Patriotic Party (NPP), any member of the NDC who attempts to intimidate or attack NPP members will not be let off the hook.

His comments come in the wake of last week’s assault on the Loyal Ladies of NPP at Suhum by some thugs believed to be affiliated to the governing National Democratic Congress when the ladies were there to canvass for votes for NPP flag bearer Nana Akufo-Addo.

Mr Dompreh said NDC parliamentary candidates who were intimidating members of the NPP and employing underhand means to enter parliament should desist from the act because the house is for decent people.
He added that even though the NPP had not reacted violently to the attacks on their members in the region, the NDC must not think that they would have it easy in the coming days.

Mr Dompreh warned Ms Ansei and Mr Debrah to stay away from the NPP in the region, else they will meet them squarely.

“Parliament is not a place for physical assault; parliament is a place for intellectual discourse, and it is place where we abide by laws. I want the lady [Ms Ansei] and her Julius Debrah to understand that if they dare us, we the people of Suhum, Nsawam, Ayensuano, and environs will retaliate,” he stressed.

Mr Dompreh issued the warning when he addressed members of the NPP in the Suhum constituency after a health walk dubbed 'Walk for Change'.

For his part, MP for Suhum, Frederick Opare, urged supporters to be calm and not allow themselves to be provoked to react with violence as a result of the attacks on the NDC.

He, however, cautioned the NDC to also desist from the attacks on the NPP else they may be forced to respond when the situation becomes unbearable.

“Nobody has monopoly over violence. If they do not desist, we will be forced retaliate,” he threatenedclassfmonline.com