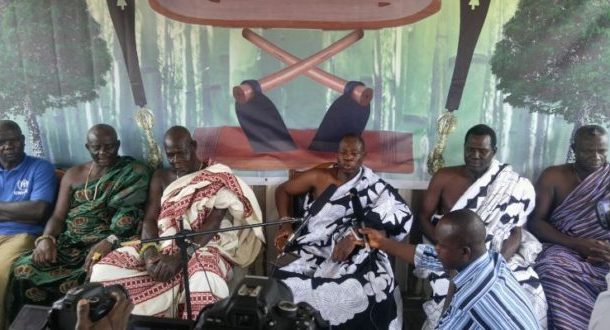 The Numo Awuley Kwao Family of Miotso in the Ningo-Prampram district of the Greater Accra Region, have appealed to President Mahama to intervene in what they termed “illegal activities by thugs ably supported by some police officers” on their lands.

The family suspect the Tema Regional Police Command has been influenced by some private developers who are “illegally” selling their lands since petitions to the police hierarchy to deal with named officers seem to have been ignored.

Chief of Miotso, Nene Awuley Kwame II addressing journalists on Wednesday, said in Ga, “We appeal to President Mahama to intervene by instructing the IGP to bring his men to order and effect the arrest of persons who shot and nearly killed some of my family members and are still parading in town.”

Counsel to the Numo Awuley Kwao Family, Mary Ohenewaa Afful, spoke about the 6600-acre plot at Miotso which led to clashes involving the family and land guards, allegedly hired by a private estate developer. She also made reference to a case involving the Prapram Paramount Stool vrs Central University College, Numo Awuley Kwao and Nene Kwaku Darpoh I with suit no. AL129/2006.

The stool had argued that, the land sold to the university was a stool land, but a High Court ruled otherwise, stating that the plot in contention is a family land belonging to the Numo Awuley Kwao Family.

The plaintiff had claimed ownership of a large tract of land at Terkpanya, which he said was acquired by his forefathers.

The 1st defendant (Nene Kwaku Darpoh), also issued a counterclaim that the land belongs to the Arden and Darpoh family of Dawhenya.

Ms. Ohenewah Afful said the court on October 27, 2011, “dismissed the plaintiff’s case entirely and the 1st defendant’s counterclaim, and ruled among many others that from the point of Central University to mile 30, that stretch of land is owned by 3rd defendant (the Numo Awuley Kwao Family)”. Another case at the Supreme Court by the chief of Dawhenya, she said, was again dismissed as “unwarranted…frivolous and vexatious” on February 17, 2016 with civil appeal no. J4/38/2015.

“Thus, from all these court rulings, it is settled that the Numo Awuley Kwao Family are the legitimate title holders of all that land at Miotso, Ningo Prampram. And that, anybody claiming absolute ownership other than the Numo Awuley Kwao Family does so in clear violation of the court’s ruling and is therefore in contempt of court and at the same time, as a smack of illegality and which action has to be brought to a complete halt by the necessary criminal action.” “We have reliable information that the said estate agent has sold large portions of the said lands to innocent people and has given a chunk of such monies to some top police officials at the Tema Metropolis, who have abandoned their legal and constitutional duties to protect lives and property and ensure peace and order and also to arrest and prosecute offenders, but rather involving in these criminal acts of connivance with fraudulent estate agents portraying themselves to have legal title and ownership of the Numo Awuley Kwao Family Lands,” she remarked.

The counsel reiterated that, “We wish to use this occasion to call on the government of Ghana to instruct the IGP to call the Tema police officers to order from meddling in acts of illegalities and to ensure peace and order since the lands legally and originally belong to the Numo Awuley Kwao Family.”

She thus advised the general public to desist from buying any land at Miotso from anybody without passing through the chief, heads and elders of Numo Awuley Kwao Family.

Meanwhile the Chief of Miotso said the family has initiated a process for the court to grant them a writ of possession.

In a related development, the head of the Real Assets Company Limited, Yacub Adzagey, has insisted that he rightfully bought the land from the Darpoh family of Dawhenya and challenged the Numo Awuley Kwao family to go for the writ of possession.

He maintained that his checks, before buying the land, indicated that the Darpoh family were the true owners of the land in contention.

Meanwhile, Jacob Tetteh Darpoh, a member of the Darpoh family of Dawhenya, says their land covers an area of 4472 acres.

He however admitted that his family filed a counterclaim in court to get possession of over 9000 acres; but the court was able to determine that they have exceeded their boundary and was subsequently “refused”.

Nonetheless, he insisted that the portion of land sold to the Real Assets belongs to the Darpoh family.

Meanwhile the police have also denied conniving with the estate developer to deprive the Numo Awuley Kwao Family of their land.

“This is totally false and there is no basis at all,” Deputy Commissioner of Police (DCOP) Paul Awini, who is the regional commander, rejected claims that his officers are backing one of the factions.

He assured that any member of his team would be dealt with if found culpable of being influenced by any party.