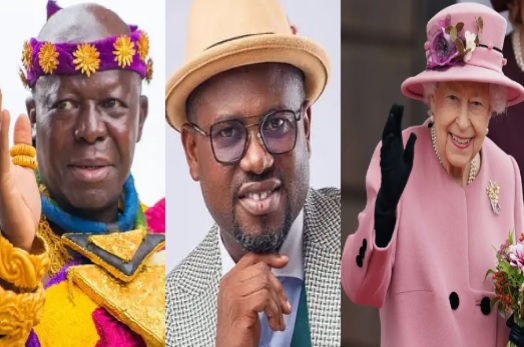 Broadcaster Abeiku Aggrey Santana has been asked to check his facts before going on live radio to say something about Ghana's history that he is not familiar with.

This criticism follows the popular broadcaster's discussion of Ashantis and British history on his #Ekwasodwoodwoo Drive Time show on Monday, September 19, 2022.

Abeiku Santana observed that the Asantehene, His Royal Majesty Otumfuo Osei Tutu II owes no one an explanation on why he could not honour the invitation offered to him to attend the funeral of Queen Elizabeth. He said that Otumfuo governs over a vast kingdom that includes occupied lands, in contrast to other traditional chiefs in Ghana.

The renowned broadcaster went on to say that it was unnecessary for any other Ghanaian traditional ruler to criticize the British monarchy for only inviting the Asantehene to the Queen's burial.

"Some of you may hold the misconception that Ashantis solely reside in the Ashanti Region. Listen, even the Fantes are from the Ashanti Kingdom. As for the people of Elmina, you are from Bantama; find out if you are a part of the Fante Confederation," He made this and numerous other remarks on the Drive Time program on Okay FM.

However, in a quick response, a Facebook user named Augustine Addo has chastised Abeiku Santana saying he has little knowledge of the facts he broadcasted on the radio.

In an audio that is in circulation on social media, he claimed that, contrary to Santana's claims, the Ashantis did not fight territories but smaller towns and villages.

"Abeiku Santana, if you are hearing me I want you to stop shouting; what you are saying you know nothing. All the Castles and Forts were built along the coasts; so when the Europeans were going, all their documents were left behind. So you know nothing about Ashantis, most of them wrote a lot of things.

"Do you know CC Rindolf, one of the early historians? "He wrote a lot, so you talking about Ashantis fighting the British is not true; it was during the time of Prof. Adu Boahen that historians decided to teach history in school, so they said we have to take out tribalism and make it Ashanti vs. the British," he said in portions of his recording aimed at refuting the broadcaster's claims.

Take a listen to the full audio below: