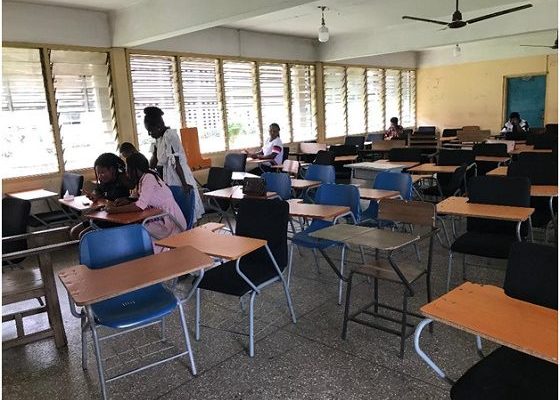 The frustrated students, who were taken aback by the teachers’ strike, had no option than to go back to their hostels and homes.

Members of the TUTAG officially laid down their tools on Monday, commencing a nationwide strike to register their protest against what they described as poor conditions of service.

According to the Association, its members had been marginalized for far too long, as they were denied due recognition, especially in the wake of the upgrading of polytechnics to university status.

“We want equal measure for the work we are doing as university lecturers just as our colleagues in the traditional universities are enjoying,” Dr. Collins Ameyaw, the KsTU Chapter Chairman of TUTAG, told journalists in Kumasi.

He said the leadership of the Association has asked members “not to teach, invigilate, mark examination papers and submit results, and also attend meetings of any of the Technical Universities.”

Dr. Ameyaw expressed worry at the cumbersome promotion processes TUTAG members were made to undergo, saying the difficulty in a lecturer at the Technical University being promoted needed a review.

The Association is also demanding payment of members’ research arrears, which had been pending since the 2018/19 academic year.

“Though the government has agreed in writing that we are to enjoy the same conditions of service comparable to the traditional universities, this is yet to be implemented,” he told the GNA.

He cited how the ‘Tier-Two’ pension payment for TUTAG members going on retirement had still not commenced, despite repeated promises by the government.

“TUTAG members are currently made to use a Scheme of Service that is harsh, compared to those existing in analogous institutions, thus slowing down the academic progression of members,” Dr Ameyaw lamented.

In his estimation, Technical Universities faced numerous frustrations in getting accreditation for their academic programmes, thus hindering their academic growth which according to him, required drastic changes for quality tertiary educational delivery. –