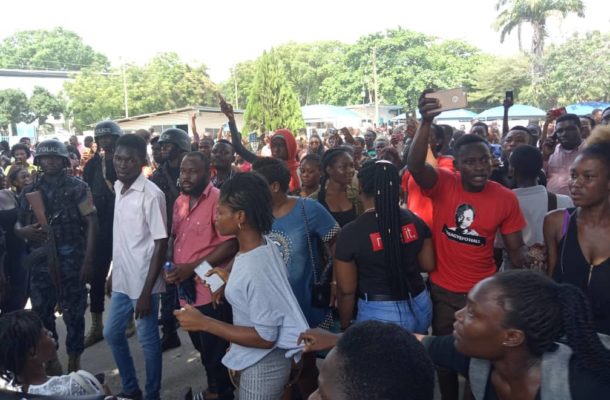 Rector of the Ghana Institute of Journalism (GIJ) Professor Kwamena Kwansah-Aidoo says students who failed to pay their fees and register within the time frame given will not be allowed to write the end-of-semester exams despite Sunday’s protests.

The Rector’s comments follow developments at the GIJ, where students protested after those who missed the deadline for fees’ payment were prevented from writing exams.

The situation led to the cancellation of the day’s examination paper, and the school administration had to call in the police to restore calm.

Speaking on 3FM on Monday, December 3, Professor Kwansah-Aidoo debunked most of the claims made by the students in the media.

“Students are making a lot of claims, most of which is falsehood,” Professor Kwansah-Aidoo told host Winston Amoah.

According to him, the students were communicated to every step of the way, and were aware of the deadlines given by the school.

“The students were communicated to on a number of occasions, the last time being 21st of November; we have given them a number of opportunities to do this.

Addressing the issue of why the Institute decided to move away from manual registration as stated by some students, Professor Kwansah-Aidoo said the world is moving towards systems decisions, hence the decision by the school to shift towards online registration to make things work more efficiently.

He also said students who failed to pay their fees and register before the deadline given will not be allowed to write the semester exams.

“If you paid after 21st November, then you have not met the deadline. The system does not know that they are students, so they do not get to write the exams because they did not meet the deadline.”

Professor Kwansah-Aidoo, however, indicated that students with genuine concerns like those paying their fees before the deadline but could not register will be catered for.

“If you come to us and prove that you paid before the deadline, we will look at it, we are not unreasonable.

“There will be an avenue, just not the way they want it because right now we have made provisions for only those who have paid.”

The Rector also said management of the school will have a meeting Monday, December 3, 2018 to decide the way forward.

He said the semester examinations will, however, continue without any issue.