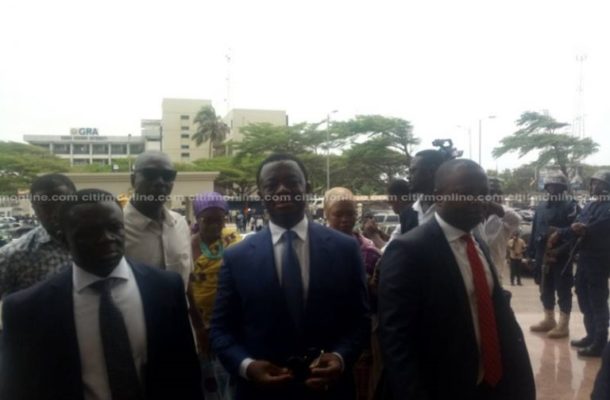 The Supreme Court has removed Justice Clemence Honyenuga from the Opuni case as a trial judge.

The Court has differed its reasons for the ruling to Friday, July 30, 2021.

Clemence Honyenuga, a justice of the Supreme Court, was sitting as an additional High Court Judge in the matter of the Republic against former COCOBOD CEO, Dr. Stephen Kwabena Opuni.

Lawyers for Mr. Opuni had earlier argued that they wanted Justice Honyenuga to recuse himself because he prejudged and determined the guilt of Dr. Opuni even before the accused person mounts the box.

But Justice Honyenuga dismissed their motion, saying, “It is my candid opinion that the application was brought in bad faith. Accordingly, the motion is hereby dismissed”.

That was the third failed attempt of Opuni’s lawyers to get the judge to recuse himself.

Unsatisfied with the ruling, the lawyers for Mr. Opuni petitioned Chief Justice Kwasi-Anin and took the matter to the Supreme Court.

The Supreme Court’s latest ruling was a 3-2 majority decision presided over by Justice Jones Dotse.

Dr. Opuni and Mr. Agongo are facing 27 charges including defrauding by false pretences, wilfully causing financial loss to the state, money laundering, corruption by public officers, and contravention of the Public Procurement Act.

They have both pleaded not guilty to the charges, and are on a ¢300,000 self-recognizance bail, each.

Agongo is alleged to have used fraudulent means to sell substandard fertiliser to the COCOBOD for onward distribution to cocoa farmers, while Dr. Opuni is accused of facilitating the act by allowing Agongo’s products not to be tested and certified as required by law.