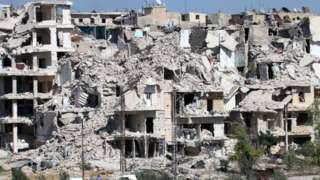 Dozens of families have left besieged eastern areas of the city of Aleppo along a humanitarian corridor, Syrian state media says.
The civilians boarded buses and were taken to temporary shelters, state news agency Sana said.

Some rebels had also surrendered to government forces, the report said.

Russia, an ally of the Syrian government, announced on Thursday that four exit corridors would be opened in Aleppo for civilians and rebels.

The move was welcomed cautiously by the UN, the US and some aid agencies.

The US has suggested the plan may be an attempt to force the evacuation of civilians and the surrender of rebel groups in the city.

On Friday, the United Nations envoy to Syria said the corridors should be administered by the UN and that there should be a 48-hour ceasefire for people to leave safely.

About 300,000 people are trapped in rebel-held eastern Aleppo and the UN says food supplies are expected to run out in mid-August.

"This morning dozens of families left via the corridors identified... to allow the exit of citizens besieged by terrorist groups in the eastern neighbourhoods," Sana reported.

It showed pictures of people, mostly women and children, walking past soldiers and getting onto buses. It said they were taken to temporary shelters but gave no details.

The report also said some fighters had surrendered to the authorities.

He also said that six temporary shelters had been set up to accommodate at least 3,000 people.