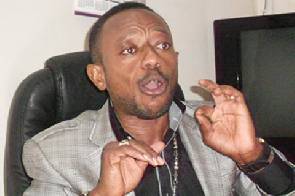 The founder and leader of the Glorious Word and Power Ministry International, Rev Isaac Owusu-Bempah has expressed surprise at his invitation by the Inspector General of Police (IGP) over a prophecy that certain persons are plotting to assassinate the flagbearer of the New Patriotic Party (NPP).

The man of God, who is known for making various controversial prophecies, said his failure to understand the police invitation stems from the fact that he cannot as a man of God interpret spiritual things to carnal men.

The man of God said at a press conference on Tuesday that some Ghanaian politicians are conniving to kill the presidential candidate of the New Patriotic Party (NPP), Nana Addo Dankwa Akufo-Addo, before the December 7 general elections.

He said the assassins are plotting to carry out the operation during one of Nana Addo’s campaign tours.

The popular preacher did not mention the names of the supposed persons scheming to kill Nana Addo, but said they would shoot him at a rally.

He said the supposed politicians have realised that until they kill Nana Addo, there is no way President John Mahama can win the upcoming election.

“God has revealed to me that some politicians in a certain political party in Ghana are conspiring with some members of the NPP to shoot Nana dead at a campaign tour. The NPP should not take this as a joke but rather provide tight security around the man,” he said.

Rev Owusu-Bempah said the security detail of the NPP was tested when a stone was thrown at Nana Addo at a recent campaign in the Klottey Korle Constituency.

He advised the NPP to beef up security around Nana Addo when he is on a campaign tour and should not allow strange people to get near him.

His comment has attracted the attention of the police who have extended an invitation to the man of God to come and explain the prophecy.

And this invitation, Owusu-Bempah speaking on Accra-based Atinka FM said is one that he would honour after discussions with his lawyers.

To him, it is baffling for the Police to invite him over a prophecy when the same police failed to invite Nigerian Prophet, T.B Joshua over his earlier prophecy that terrorists were planning to attack the country.

“Why did Police take the prophecy by T.B Joshua seriously and acted on it but not taking that of mine, a Ghanaian serious? How can I prove the prophecy of God…?, he quizzed.

He further called on the police and the bodyguards of the NPP flagbearer to act on his prophecy by beefing security around him especially when he tours the Volta Region which is his next stop after touring Ashanti Region.

He however called on the police to take his prophecy seriously as certain prophecies by him which were not heeded came to pass. And this he said included the death of Prof John Evans Atta Mills and the June 3rd disaster.