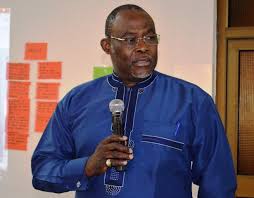 “We are in opposition but do not sit down before NDC will come to power. …involve yourself so you will also benefit from policies and programs of this government”, he said.

“Everything the Akufo-Addo government will do is for all of us”, the 2020 NDC presidential candidate hopeful pointed out to party members in the Asawase constituency in the Ashanti Region.

Speaking to some Polling Stations Executives in the constituency, Dr. Ekwow Spio-Garbrah stressed the importance for the members to unite on one principal after the party hefty defeat in the 2016 polls.

According to Dr. Ekwow Spio-Garbrah, the 2020 general elections will be a crucial one therefore NDC will need a candidate to attract votes from other political parties to wrestle power from the ruling New Patriotic Party (NPP).

“Like in the Bible, NDC will need David to fight Goliath NPP. …and I am the David”, urging delegates to see the upcoming polls as such.

Dr Ekwow Spio-Garbrah is among the many faces seeking to lead the NDC into the 2020 polls after a couple of futile attempts in the past.

Others have however denied the claims and indicated they will throw their support behind the best candidates.