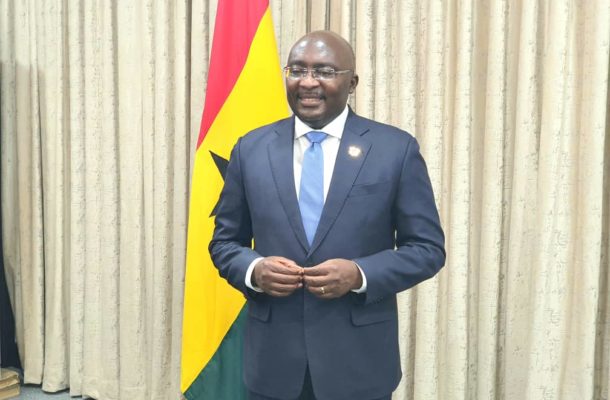 It's a hot Tuesday afternoon and inside one of the exclusive conference rooms at the seat of government, the Jubilee House, are staffers busily editing scripts and entering data on their computers.

With them, sitting at the end of the long conference desk is a man behind a computer, with a pile of files on one side of the desk. Sleeves rolled up, and eyes firmly fixed on the computer screen, this man is obviously the busiest in the room, as he types, and reads through files on both the computer and from hard copies on the desk.

Intermittently, he interacts, moves around to various staffers in the room to compare notes and returns to his desk to continue his work.

This scene, in the conference room, has been going on since morning, and many days before.

Guess who's the man in reference?

That man, that Tuesday afternoon, was Ghana's Vice President, His Excellency Dr. Mahamudu Bawumia, with sleeves rolled up, in his office, with his staff, working closely with us, as though he wasn't the Vice President, the number two gentleman of our dear country. That was our boss, a perfect example of humility.

It was on Tuesday August 18, 2020, and the scene above was Dr. Bawumia's final preparation for the famous and groundbreaking government infrastructure delivery town hall lecture he delivered in Accra prior to the elections in December. 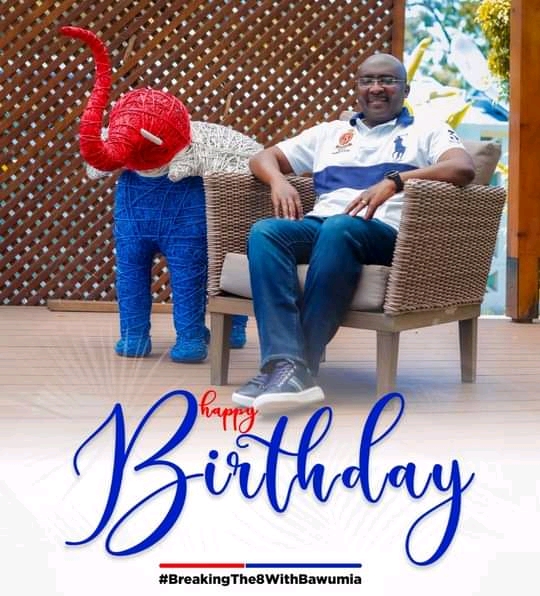 Prior to the lecture, the opposition NDC communication had been stressing to Ghanaians that the government of President Akufo-Addo, in nearly four years, had nothing to show, in terms of infrastructure. But Dr. Bawumia's evidence-based digital presentation, detailed the incredible infrastructure the NPP government had undertaken, providing incontrovertible proof on the impressive government infrastructure tracker website.

The scene in the conference room on August 18, 2020, was just a fraction of the meticulous and attentive preparation the Vice President had given to the lecture many weeks before. And the scene typified how serious the Vice President takes his job.

For those of us who have had the special privilege of knowing and serving Dr. Bawumia, it was not surprising to see him in our midst, leading by example and working so closely with us, even on the day of his presentation until the final two hours to the presentation.

That is so characteristic of him; humble, detailed, meticulous, hardworking, intelligent and inspiring!

Dr. Bawumia is not an arrogant, armchair leader who issues instructions and goes to sleep for the job to be done. He gets involved in the job, and accords everyone, regardless of status, their due respect.

A great leader is one who pays attention to detail. As meticulous as he is, Dr. Bawumia never misses a missing dot on an i, or a t, that has not been crossed. With Dr. Bawumia, it is always about excellence and everything matters to him.

Every positive attribute of the Vice President is driven by his resolute commitment and hard work. His commitment ensures he is always on the move; thinking, strategising and working tirelessly for the NPP party, the government, and the nation. And his incredible hardwork, means that once he commits to something, there is no turning back until the ultimate has been achieved.

Nobody, who has come close to Dr. Bawumia, or has worked with him, will dispute these remarkable attributes of the Vice President.

"I want all of us here to, and on behalf of my colleagues, say a very big thank you to the type of leadership the EMT has enjoyed from Dr Bawumia," said the former Finance Minister last year at a government town hall meeting.

Hon Osafo Marfo continued: "A chairman who is so involved in the work of [everyone else]. He works like a member, like a secretary. Sterling quality, professionally excellent. So we are where we are because Dr Bawumia is putting up a very professional chairmanship to the EMT. And I pray that we continue to work together as a team."

The eulogies shared by the Senior Presidential Advisor encapsulate many people's opinions of Dr. Bawumia as a hardworking, intelligent leader.

As Dr. Bawumia celebrates his 58th birthday today, tones of tributes that have been pouring in from all sections of the public, demonstrate the genuine reverence people have for him. Even his fiercest political critics concede privately that he is a gem.

No wonder the Minority Chief Whip once referred to MP for Bolga, Albert Adongo, as the NDC's Bawumia, as far as economic analysis is concerned.

The open show of love for Bawumia, of course, riles a few, but Dr. Bawumia did not just get up to be loved so intensely, especially by members of his party and the general public. The open show of admiration, is a reward for his years of committed service and loyalty to the NPP party, government and the nation.

For those of us who are privileged to serve the Vice President, we can only continue to draw inspiration from his special qualities.

It is rare to work with a leader who doesn't only lead, but serves. In Dr. Mahamudu Bawumia, we have a man of impeccable qualities who teaches us everyday to be humble, hardworking and to be kind to all manner of people.

And in Dr. Mahamudu Bawumia, Ghana has an amazing Vice President and a servant whose sole aim is to drive his staff along, as he supports President Akufo-Addo to deliver his mandate to improve the well being of Ghanaians.

Dr. Mahamudu Bawumia, has been, and will always be, a great asset for the NPP and the country Ghana.
The Almighty Allah has blessed him with special leadership qualities.