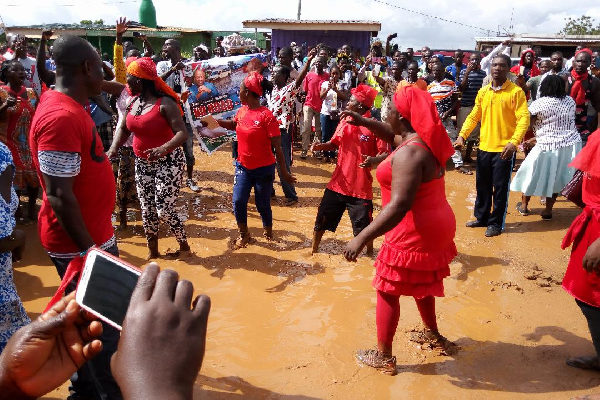 File Photo: The peasant farmers embarked on a demonstration Wednesday

There is escalating tension in some communities in the Upper West Akyem District of the Eastern Region over the destruction of farmlands in the area.

The land developer has reportedly deployed armed land guards to the area unleashing terror on farmers who attempt to resist the grading of the lands.

The Peasant farmers from about twenty(20) Communities on Wednesday, May 13, 2020 defied restriction on the public gathering by embarking on a protest.

They were from farming communities such as Asuosu, Alafia, Kalape, Adiembra No. 1, and 2, Danso among others.

According to the farmers, large tracts of farmlands have so far been destroyed by the developer.

“We did not get any information all that we saw was a caterpillar and grader machines on our lands grading and destroying our lands. One person has taken just one day to destroy all that our grandfathers and ourselves laboured for. We have stayed on this land for over 200 years but this man is claiming the lands have been given to him by Okyenhene and even the President”

“We are appealing to the President to intervene. They have unleashed land guards on us destroying our lands. They have destroyed all my crops”

The aggrieved farmers say the incident will afflict hardship on them since farming is their only source of livelihood.

The Chief of Asuasu, Osiahene Obiri Mantey who participated in the protest warned that residents may take the laws into their hands should the security fail to intervene to stop the developer from destroying their farmlands.

Assembly Member for the Asuotwene Electoral Area, Raphael Beyuo lamented that the developer has taken land earmarked for construction of a school building.

“We are told he is going to farm mango but look at how he is destroying our farms. Even school lands he has been graded. Government land cannot be taken like that, where will our children go to school in future. They came with land guards else we would have resisted them”

The District Chief Executive, Eugene Sackey told the media that, he has summoned the developer to a meeting with opinion leaders in the affected communities to ensure due processes are followed.