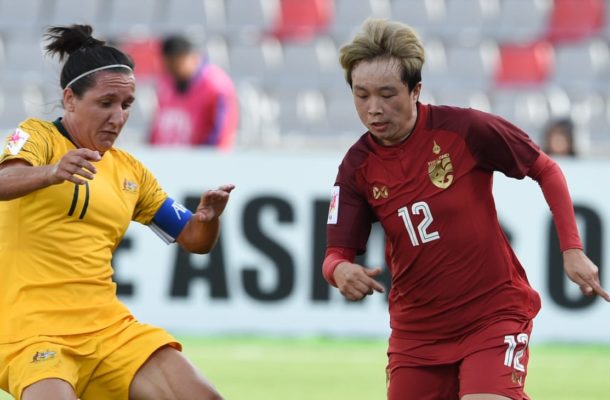 Larnaca: Thailand ended a six-match losing streak, earning their first international win since last July with a 4-0 thumping of Hungary in their opening match at the Cyprus Women's Cup on Wednesday.


The Southeast Asians were far too strong for their European opponents in the Group B clash, scoring twice in each half to cruise to victory in their first ever outing in the tournament.

Midfielder Rattikan Thongsombut (pictured above) gave Nuengrutai Srathongvian's side an 11th-minute lead, before 2015 FIFA Women's World Cup hero Orathai Srimanee scored in the final minute of the first half to make it 2-0 at the break.

Rattikan added her second and Thailand's third in the 49th minute before US-born forward Suchawadee Nildhamrong completed the rout with four minutes remaining, ensuring the Chaba Kaew will be full of confidence in Friday's meeting with Mexico, who lost 5-0 to Italy.

Earlier, DPR Korea made their own winning start to the competition, with Kim Yun-mi scoring twice in a 4-2 win over Czech Republic.

The East Asians, who have finished third in the past two editions of the tournament, raced to an early 2-0 lead thanks to goals from Kim and Ju Hyo-sim (pictured below), before Eva Bartonova pulled one back for the Czechs just after the hour mark.

Ri Hyang-sim, a 2016 FIFA U-20 World Cup winner, restored the two-goal buffer in the 83rd minute, but another Czech goal from Tereza Szewleczkova made it 3-2 in the dying moments, before Kim added the game's sixth and final goal in injury time to seal the three points.

Four Asian national teams were also in action in the Turkish Women's Cup, which began on Wednesday, with Group A's Uzbekistan the only side from the Continent to emerge victorious on day one.

They defeated India 1-0 in the city of Side thanks to a goal from Malika Burhanova, but Central Asian neighbours Turkmenistan suffered a 13-0 defeat at the hands of a rampant Romania in the same group, while Jordan fell to a 6-0 loss to Northern Ireland in their Group B fixture.