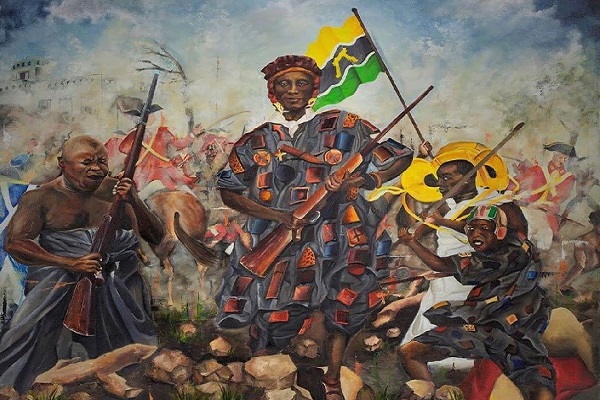 Osei Tutu Kwadwo dared the British and won against them

In colonial times, the natural, regular order was for the colonized to be the cowards in most of the things that transpired in those eras, regardless of how oppressing or challenging they were.

But like most stories, not everyone always falls in line when subjects of this nature come up for discussion.

In 1824, the Ashanti King at the time, Osei Tutu Kwadwo, decided to go head-to-head with the British colonizers in the then Gold Coast, daring to completely destroy them and use their skulls as drinking cups.

And this, he did, helping his people win against the British in the battle of Nsamankow of the mid to late 1800s.

Although their win wasn’t prolonged, as the British eventually overshadowed them, those daring words of Osei Tutu Kwadwo made a huge difference.

“If you, the British, dare to invade, I will use your skull as a drinking cup and your jawbones to beat my drums,” the Ashanti King, Osei Tutu Kwadwo, told the British Governor, Sir Charles McCarthy.

It is worth mentioning that the first Anglo-Ashanti War, during which Osei Tutu defeated the British, began when the Ashanti claimed territory was disputed with the Fante, a client state of Great Britain.

In 1823, Sir Charles MacCarthy, the British governor of the Fante region, rejected the Ashanti claims and led a British army of 2,500 against the 10,000-man Ashanti army.

On January 22, 1824, in the battle of Nsamankow, the Ashanti defeated the British forces and killed MacCarthy.

The Ashanti defeated the British and their African allies, the Fante and the Denkyirans, again in the Battle of Efutu later that year. The British were forced to withdraw to their colony at Sierra Leone in 1828.

The war officially ended in 1831, after the Ashanti accepted the Pra River as the boundary between the British-controlled Fante coastal region and the Ashanti Empire.

About the Battle of Nsamankow:

In late 1823, following the disagreements between the Fantis and the Ashantis, the British declared war on the king of the Ashanti.

After organising the defences of Cape Coast, the British Governor, Sir Charles McCarthy, set out with an expedition of some 80 men of the Royal African Colonial Corps, 170 men of the Cape Coast Militia, and 240 Fanti tribesmen under their local chiefs.

According to military-history.fandom.com, he was accompanied by a captain and an ensign of the 2nd West India Regiment, as aides-de-camp, a surgeon of the same regiment, and J. T. Williams, his colonial secretary.

On the night of the 20th, still without having joined forces with the other three groups, his force camped by a tributary of the Pra River. The next day, at around 2pm, they encountered a large enemy force of around ten thousand men; in the belief that the Ashanti army contained several disaffected groups whose chiefs were willing to defect, McCarthy instructed the band to play the National Anthem loudly. The Ashanti responded by approaching closer, beating war drums, and his beliefs were swiftly dispelled.

Fighting started shortly thereafter; the two sides were separated by a 60-foot-wide (18 m) stream, which the Ashanti made no major attempt to ford, both sides contenting themselves with staying firm and keeping up a continual musket fire.

However, the British forces were lightly supplied; the bearers bringing the supplies up in the rear, which included most of the gunpowder and ammunition, mostly fled after hearing the firing in the distance and encountering deserters straggling back. Only one additional barrel of powder and one of shot were brought up, and ammunition ran out around 4pm; the Ashanti then made a determined attempt to cross the river, and quickly broke into the camp.

Almost all the British force were killed immediately; only around 20 managed to escape. McCarthy, along with the ensign and his secretary, attempted to fall back; he was wounded by gunfire, however, and killed by a second shot shortly thereafter. Ensign Wetherell was killed whilst trying to defend McCarthy's body and Williams taken prisoner.

On his return, he related that he had only survived through being recognised by an Ashanti chief for whom he had done a small favour, and was spared. He was held prisoner for several months, locked in a dwelling which he shared with the severed heads of McCarthy and Wetherell, kept as trophies of war.

McCarthy's gold-rimmed skull was later used as a drinking-cup by the Ashanti rulers.
Source: GhanaWeb