The 'cold-hearted beastly' Ghana police and the 'civilian uprising' 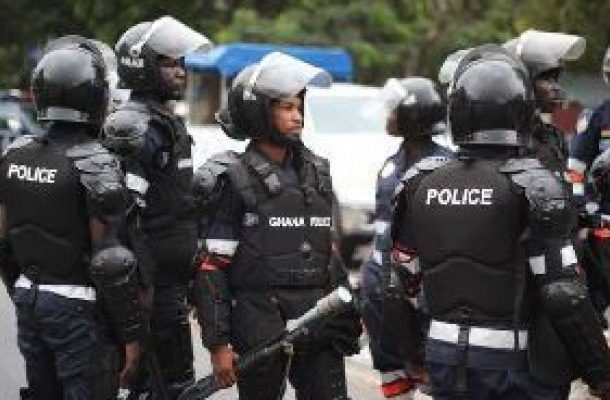 Last Thursday, the video of a police officer being assaulted at Weija by a ‘trotro’ driver and his bus conductor went viral on social media.

The police administration later expressed surprise at the public’s indifference since the public chose to adopt the ‘spectator’ position while an officer was being beaten.

The Director-General of the Police administration, ACP David Eklu on an Accra-based radio station even expressed his surprise at the onlookers who did not try to separate the fight or come to the aid of the officer, as they have done in other instances, describing it as “a case of complete disregard for the law, and also public apathy in assisting the police at that critical moment.”According to ACP Eklu, there have been instances when the police have been called on their emergency line and the patrol team had gone to assist or when the public had assisted the police.

Hence, it is difficult to understand why the public looked on while the officer was being attacked.

But my question is: have the police courted the disaffection of the public? Francis Buabeng, and his assistant, Albert Ansah, were arrested and were arraigned on 18 March 2019 for assaulting the officer who tried arresting them for a road traffic offence, in a matter of days after the incident. The accused did not even have legal representation during the court proceeding. How fast I thought that was since the police do not even respond that rapidly to distress calls from citizens whose lives they are tasked to protect. Well, the reason for the rapid response to this incident is obvious – one of their own was at the centre of it all.But have the Ghana police thought of all the times they have brutalised the ordinary Ghanaian for reasons unknown to anyone but themselves and all the times they have shot and killed members of the public without an explanation or over claims of ‘so-called mistaken identities’ or over accusations of being ‘alleged armed robbers?’ Can we now say that the public has gotten tired of the insensitivity of the police and their acting above the law in recent times?

Hence the obvious question: are the police paying for their deeds?On Thursday, three Ghanaian Times journalists including a lactating mother were assaulted by the police, yet all the service has done is to institute a service inquiry against the ten police officers instead of initiating prosecution of its men, yet they have initiated prosecution against the bus driver and his conductor. They always have service inquiries resulting in transfers only and no stiffer or proper punishments.

More than ten members of the public have been shot and killed by the police from 2017 to date including the innocent Gang of 7 shot dead at Asaawase in the Ashanti Region; 28-year-old Emmanuel Kwesi Amofa, shot at Agbogba; Akosua, who was shot at Agbogboloshie; 25-year-old Divine Aquinor, who was shot at Teshie; Graham Owusu Sekyere, who was allegedly assaulted to death by the Adentan police.According to autopsy reports, Emmanuel was shot at close range. He was shot at Agbogba by the police over claims that he was an armed robber. Reports by the Criminal Investigation Department (CID) indicate he was not an armed robber, according to a publication in the Finder Newspaper. The police have, however, not instituted any sanctions on the alleged killers of Emmanuel, neither have his parents been given a copy of the police report. Listening to the father of the deceased speak on an Accra-based radio station, it is obvious the family feels they have been treated unfairly by the police service. Who investigated the killers of Mr Amofa anyway? Is it the police themselves?In January 2019, 25-year-old Divine Akuinor was shot dead by the police over the same claims – he was an armed robber. His family insists he was no armed robber; the police, however, stated he was and the airwaves were filled with news of a certain young lady purporting to be the victim of Divine’s robbery escapade that led to his death that night. Attempts to get justice for their son is yet to yield any results, as the police, who have become the servers of sour soup to majority of the Ghanaian public, continue to serve his family more sour soup, as if their actions of killing an alleged innocent son of a family was not enough, by going ahead and carrying out an autopsy on the deceased without involving the family of the deceased. Obviously, his body has become a property of the Ghana Police Service, as Divine still lay in the morgue, almost two months after his death and only the police service can give reasons for their actions.Some residents of Fadama have also accused the police of brutalising and killing one of the residents. Article 15 of the 1992 Constitution explains that (1) “the dignity of all persons shall be inviolable [that] (2) No person shall, whether or not he is arrested, restricted or retained, be subjected to; (a) torture or other cruel, inhuman or degrading treatment or punishment. Chapter Five (5) of the 1992 Constitution sets out, for example, Fundamental Human Rights and Freedoms provisions in its Articles 12; 13; 14 and 15. (b) any other condition that detracts or is likely to detract from his dignity and worth as a human being.” Do the police not take into consideration also the rule of natural justice – ‘audi alteram partem’ translated as ‘hear the other side’ or ‘no man should be condemned unheard’ before killing these innocent citizens? No disputing the fact that legally, they do have a right to shoot in some circumstances but it is obvious that some officers within the service are over exercising their authority by killing innocent people only to frame them as robbers.

In 2016, a certain police officer, while on duty on the Osu Oxford Street, at a police checkpoint after Papaye Fast Foods, assaulted a young man who had stopped at the checkpoint to be checked by the police. While about to drive off after the search by the first officer, a second officer from nowhere came and asked the driver of the vehicle, “Are you sure you’re not drunk?” I still do not know what the officer meant by that question, but I think the answer to that question should have been a simple ‘yes’ or ‘no’ from the young man. However, a young man who saw no reason for the questioning, as he probably thought he had not given off the slightest indication of alcohol-induced behaviour, became the victim of abuse, as the police officer said he had disrespected him. He pulled him out of his car and started beating him up. Oh yes, this happened right in front of me. He eventually said the young man was under arrest for drunk-driving and invited him to the station.The Breathalyser test, however, proved negative with no traces of alcohol at all. The police officer, however, detained the suspect from about 10 p.m. on Sunday to 4 a.m. on Monday. Every attempt by his colleague officers to talk him into letting the man go proved futile, until alas, he felt it proper to let him go. What would you call that?Everyone in Ghana has stories or has heard stories of men and women in uniform, misconducting themselves and getting away with it including the Midland Savings and Loan police officer, among others.Delivering his state of the nation address in February 2019, President Nana Akufo-Addo said: “We cannot have a successful police service without the cooperation of the population, the cooperation starts with giving respect to the police and encouraging them to earn the trust of the people by serving the public with dedication.“I’m glad to note that the police service is moving to modernise its own rules and regulations, we should hold them to their vision to become a world-class service capable of delivering planned, protective, and peaceful services to the standards of international best practice in a democracy.“For the first time since the colonial Gold Coast era, the police service instructions that govern every aspect of internal professional behaviour have been wholly revised from the code of ethical conduct to administration, welfare, recruitment and training, use of firearms. The new service instructions put into writing specific directions for every rank.“Police orderlies, charge officers, crime officers, regional and divisional commanders, commissioners of police through the authority of the Inspector General himself in every aspect of their work.“The police must police themselves first.” Did the police hear that at all?A large section of the public I have heard speak to the Weija issue is actually elated that that young officer was assaulted by the bus driver and his conductor and wish more of those assaults will be carried out on such officers. Why must this be? Only because some families have not found closure after their innocent sons and daughters were killed. No apology, nothing! And the public have lost confidence in the entire system, obviously because of some trigger-happy officers, which is very detrimental to our democracy.It is time for the police to start taking responsibility for their actions. I support calls by CHRAJ on the IGP to initiate prosecution against his men regarding the assault of the Ghanaian Times journalists. A different institution should be in charge of judging the conduct of the police rather than allowing the same police to police itself. The police should not be allowed to judge their own conduct. It will not only build public confidence in the service, but it will also help decrease the rate of impunity, according to experts.One thing is obvious: civilians have lost faith or trust in the police administration due to recent occurrences and once the citizenry begins to challenge the police when they think they are aggrieved, it is a threat to the country’s democracy. We eagerly await the body cameras being supplied to the service, among other appropriate measures, to curb what has become a tradition of police brutalities. Hopefully, the trigger-happy men and women in the service who are painting the entire police service black and courting public disaffection for the service, will be singled out.By: Elikem Adiku