The great West African kingdom that made its mark in gold 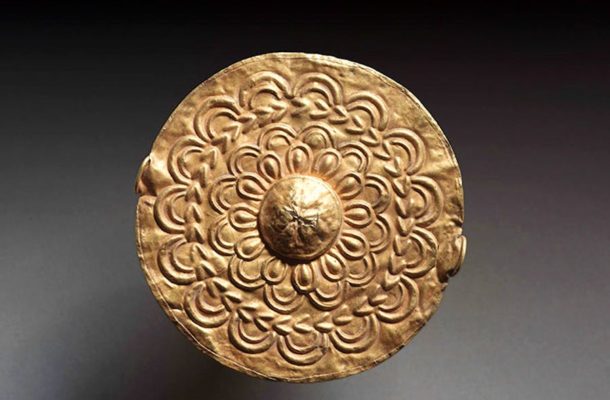 From its establishment in 1701, the Asante kingdom – covering much of southern Ghana and parts of the Ivory Coast – owed its considerable wealth and power, and status in the wider world, to its gold fields and dazzling royal regalia. Today, despite the experience of British colonisation, Asante culture is alive, in particular among the global diaspora of the Asante peoples. In 1999, Osei Tutu II was installed as the 16th Asantehene (king of Asante), sitting beside the Golden Stool that embodies the soul of his nation. The historic and continuing culture of the kingdom is celebrated at Dallas Museum of Art’s exhibition ‘The Power of Gold: Asante Royal Regalia from Ghana’.

The dynamism of Asante culture, along with the fact that it survives so vividly, is as startling as the lavish objects on display. There are more than 100 pieces on show, which range from 18th-century brass bowls, the geometric designs of which are inspired by the Islamic cultures of north Africa (with whom the Asante traded), to a dual-disc pendant made in 2017 by Ghanaian artist George Kofi Dokyi.


Not all the pieces are gold, but almost all carry symbolic messages. The paraphernalia of gold-dealing, made from brass or brass alloy, had its own significant status – goldweights might be fashioned as animals, birds or human figures, each referring to one of some 7,000 proverbs or aphorisms that reminded citizens of their place in what was a strictly hierarchical and only verbal society. For instance, every Asante who saw a goldweight of a crocodile with a catfish in its mouth knew it meant that whatever the catfish eats benefits its crocodile master – that is, the king.


Additionally, there are boldly carved wooden ceremonial stools, huge silk and cotton kente wraps with rhythmic geometric patterns, and videos and photos commissioned for the exhibition and dotted through the galleries to show wooden drums being played today for ceremonial functions, weavers working on narrow looms, and leather caps sewn with gold medallions worn in processions.


But it is the gold that astounds. The plate-sized gold discs are worn by the ‘soul washers’, the priests who look after the ruler’s soul. A large gallery carries the title ‘Royal Regalia: Head to Toe’. Here, gold-wrapped items to adorn head, neck, fingers, arms, elbows, breasts, chests and even feet sparkle with ingenious gold spiders’ webs, hen and chicks, or fearsome lion decoration. Each symbolises a proverb. For example, the royal sandals on show are loaded with meaning: if the king goes barefoot there will be famine (so an ever-present assistant carries a spare pair when the king is out and about). A pair with gold-leafed birds on the straps probably represent the ‘night bird’; this brings bad luck if you catch it but good luck if you leave it alone, indicating the dilemmas inherent in royal responsibility.


A dozen of the pieces on show belong to the DMA; its impressive African collection was kickstarted by Margaret McDermott’s patronage in the 1960s. One recent acquisition is a 19th-century sword ornament in the form of a spider (a metaphor for the powerful Asante government counsellors). While researching its history in the UK, curator Roslyn Walker had the idea for the show. ‘I want audiences to go away with an appreciation of the Asante people,’ she says, citing the fact that there have previously been very few previous shows about the Asante. ‘They were matriarchal, sophisticated and inclusive.’ She points out the pieces that indicate land traders from north Africa introducing patterns and bowl shapes, and British sea traders introducing heraldic lions. ‘And I want to demonstrate that Asante culture is alive and well.’


The Asante exhibition reflects the upbeat mood of the DMA under the directorship of Agustin Arteaga. An encyclopaedic museum, the institution is at the heart of the city’s revived core – a once derelict 68-acre site has been transformed into a thriving arts district that includes performing arts spaces, a large park, and the Nasher Sculpture Center and the Crow Collection of Asian Art. Entry to the DMA has been free since 2013. Arteaga, who arrived in 2016, has a solid vision to build on this.

‘We want to be inclusive – I’m not fond of the word diversity,’ he says. ‘The DMA uses the highest scholarship to facilitate the learning process, to stimulate our visitors’ curiosity and then encourage active learning so they use the museum as their own resource.’ He sits up and leans forward. ‘Active, not passive, you see.’ Arteaga and his team have been reaching out to different neighbourhoods of the city, and made the museum and its website bilingual in English and Spanish. They are also working across departments within the museum. ‘We want the old to become new. We have to see that the world has always been globalised, not fractured. We must provide opportunities for people to have a better understanding of how the world works. We have to think about constellations, not a linear fragmented narrative.’ He believes the Asante gold show does just this. And since it is built around magnificent pieces from the DMA collection, it should also lure visitors upstairs to explore the permanent Africa galleries.

‘The Power of Gold: Asante Royal Regalia from Ghana’ is at the Dallas Museum of Art until 12 August.