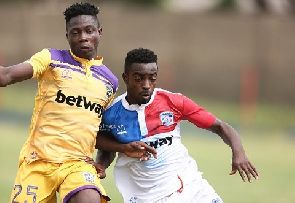 The curtains were drawn on the first round of the Zylofoncash premier league over the weekend. It has been 15 game days of unadulterated football artistry from the stables of Ghana. Not devoid of perennial blemishes of hooliganism, uncouth behaviour by team officials and under par performances by match officials it has been an eventful first round of league action.

Week 15 kicked off on Saturday with a clash between Ebusua Dwarfs and Dreams FC. Leonard Owusu scored early on the first half for Dreams FC but Michael Agyei pulled parity before the break. Spoils were shared at the close of proceedings.

Wa All Stars recorded a win in a long while as they defeated Eleven Wonders by a lone goal to nil. Maxwell Oppong capped his man of the match performance with the only goal of the match.

Bechem United left it late to come from a goal down to defeat West Africa Football Academy 2-1 At the Nana Gyeabour park. Umar Bashiru struck midway through the second half for WAFA but Hamza Mohammed leveled affairs before Hafiz Konkoni broke WAFA hearts with an injury time winner.

The weekend’s top liner between Asante Kotoko and champions Aduana Stars went in Kotoko’s favour. New fan favourite Sogne Yacouba scored in either half before Sam Adams pulled one back for Aduana.

Elmina Sharks were held to a 1 all draw by Liberty Professionals at the Nduom stadium. Yakubu Mohammed continued his impressive form after joining on loan from Kotoko with the equalizer for Sharks after Tamimu Muntari had put Liberty on the front foot.

Hearts of Oak held onto a slender 1-0 lead until the 93rd minute before substitute Tahiru Awudu showed up from no where to deny Hearts all three points and gift Medeama SC a valuable point.

Karela FC edged out Inter Allies in a 2-1 encounter at the CAM park in Anyinase. Paul Abanga got Inter Allies back into the game after canceling out Abdul Ganiyu’s opener through the spot. However super substitute William Opoku Mensah scored the winner late on to secure maximum points for Karela FC.

The Ghana premier league for the umpteenth time suffered an unwarranted delay due to an avoidable league tussle. The league finally kicked off as the court dismissed the case which held the league to ransom.

The major highlight of week 1 was the introduction of the match command centre, first of its kind in any league on the continent to enhance swift delivery of match reports to the football association’s headquarters. An action in response to the circumstances which led to the legal tussle before the start of the league. In the light of this, THE BLIND PASS anticipated what would have become of our football if only proactivity could usurp reactivity.

By week 2 Ashanti Gold SC remained the only side with a 100% record in the league. Their best start since winning the league four seasons ago. Surely there was a noticeable change that was holding firm the centre at Ashgold.

Week 3 was characterized by a grave miscommunication which saw Elmina Sharks make the long trip to Berekum only to realize their game with Berekum Chelsea had been rescheduled. Outlandish!

Champions Aduana Stars who had stuttering start to their season roared back in ruthless fashion in week 4. Their 6-0 drubbing of in form Inter Allies reinstated their title credentials.

By the close of week 5, an order of equals seemed to have been established. 9 points separated top from bottom and no single team seemed to tear away with very little to choose between competing teams.

A record well kept was expertly broken in week 6. West Africa Football Academy had gone a whooping 46 games without defeat and were on the verge displacing a similar record by Berekum Chelsea. Standing between them and this enviable record was a certain Medeama SC. The game stood at 1-1 and all were bracing up for recording breaking finale until Kwesi Donsu struck. When the diagonal cross field looping pass aimed at Donsu was hit, it looked very routine and innocuous until the attacking midfielder met it with a sweet pile driver into the top bottom corner, RECORD BROKEN!

The tale at the end of week 7 was one of a cast of crabs’ play in a basket. No one team seemed to make headway with a smooth run. Ashgold topped the table on 13 points whilst Wa All Stars languished at the bottom with 5 points. One could only admire the thug of war in mid table.

With 43 titles between them, the normal order was for Hearts and Kotoko to lead the way in any title charge. On the contrary these giants were living on a knife edge by week 8. Kotoko and Hearts had only managed 11 and 10 points respectively from a possible 24. A return so porous by their own high standards.

In week 9, Ashanti Gold SC had gone from pretenders to serious title contenders with their consistency. Whereas Obuasi was buzzing Hearts continued in their dilly dallying as a showdown with Kotoko in Kumasi approached. Fans had already cracked the whip and the pressure on the rainbow team was incessant.

Week 10 ushered in the biggest game on the local calendar. The unique veneration associated with winning such a game meant that form guide certainly had little impact on the game. In the end Hearts were able to resonate the glory and glamour of old in the midst of trying times. A sweet 1-0 victory over their sworn rivals and their serial pomp and pageantry at the Baba Yara stadium was re-enacted.

It was a midweek goal feast in week 11 as the quartet of Hafiz Konkoni, Benjamin Tweneboah, Victorien Adebayor and Leonard Owusu bagged braces playing against each other in that order.

With an enviable run under their belt, 5th on the log, 10 goals scored, 6 conceded, 17 points, 4 games won, 5 drawn with 2 games less Elmina Sharks were somehow still unheralded by game week 12.

Before the start of week 13, a groundbreaking sponsorship deal had being secured which meant that the financial burden on many a league was reduced in earnest. With this development one expected the image of the FA to be enhanced but a bombshell erupted. The FA president was picked up for defrauding under false pretense. A move which shook the hierarchy of the football association and further deteriorated their already damaged reputation. On the scorecards at the end of week 13, it was an eventful few days with positives hovering around a ghastly situation in our football. A clear case of one step forward, a lot more steps backward with 0 work done.

In the midst of the controversy and brouhaha the league soldiered on in week 14 with fear and panic hovering over Ghana football.

At the close of the first round Medeama SC are top of the pile on 27 points and they are the top scoring club thus far with 19 goals.

Wa All Stars languish at the bottom with 10 points having scored the least number of goals, 8 whilst letting in the highest, 18.

Ashanti Gold SC have the meanest defence in the league with only 9 goals conceded whereas Inter Allies are the most impregnable at home with no goal conceded in the entire first round.

This is how the clubs are faring at halfway,