The Prison Officer: A forgotten engineer of your sound sleep 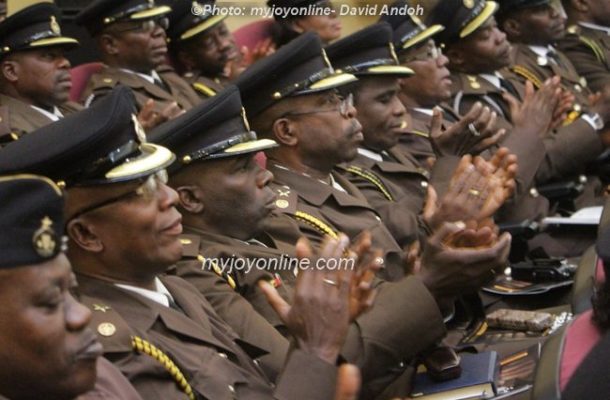 Many security experts suggested measures government should put in place to check the trend. These suggestions mostly centered around resourcing the Police and in some cases, the Armed Forces to face armed robbers boot for boot. The government responded positively by committing resources to aid the fight.

The final point of the fight against robbery and all other crimes, undoubtedly, is the prison. Prison officers are mandated by law to ensure the safe custody, welfare, rehabilitation and reformation of convicts. In this wise, the officer is required to securely keep ‘societal misfits’ and to attempt to realign their way of thinking to acceptable societal standards.

Attacks and escapes during escort duties

Prison officers take charge of escorting inmates to courts, hospitals and outside labour. In the case of outside labour, an officer is assigned to four inmates. It is interesting to note that, inmates on outside labour work with tools which can easily be converted to weapons. The officer, by prison regulation, is not to be armed when on outside labour.

Though prison authorities do due diligence in the selection of inmates to go on outside labour, the line in Shakespeare’s Macbeth that “There’s no art to find the mind’s construction in the face” always plays out.  Though officers in most cases safely return inmates to facilities, there are situations where some inmates attack escorting officers and escape to freedom.

The prison, like Gresham Sykes rightly intimated in his book “The Society of Captives: A study of Maximum Security Prison”, is a place of extreme deprivation. The inmate is denied access to goods and services, liberty, sex and autonomy leading to “pains of imprisonment”.

These deprivations, coupled with the conditions in our prisons, have on some occasions led to violent riots against prison authorities. While some riots result from prison authorities preventing inmates from enjoying old habits such as drug usage and violent conduct, others are as a result of prison conditions related to feeding, bedding, healthcare etc.

Prisoner riots mostly occur after routine searches to retrieve contrabands from inmate cells. Officers detailed for duty inside inmate housing units are mostly the first to be attacked. The situation is mostly volatile and when not swiftly checked result in fatalities.

Crime these days has become sophisticated, leading to hefty sentencing and the rise of a bourgeois class of prisoners. Our prisons are experiencing a growing number of affluent offenders, exposing facilities to cabals who may plan attacks to free their ‘bosses’. No one enjoys imprisonment and so there is always a ready support base from within prisons for gangs outside who plan jailbreaks.

In the few cases of jailbreak or attempted jailbreaks that Ghana’s prison system has experienced, the prison officer stands between the would-be jail breaker and freedom. If the security apparatus of the facility under attack are not up to task, the attackers would prevail, leaving behind either a dead or heavily mutilated officer.

The most recent cases of jailbreak at Sekondi in May 2010 and Kumasi in February 2015 resulted in life threating acts of violence visited on officers by jail breakers.

Due to the congested and deplorable state of our prisons, inmates easily catch infections. Tuberculosis, hepatitis and other communicable diseases are common health conditions in our facilities.

The officer is at equal risk of being infected as a greater portion of the officers’ day is spent in prison. These communicable diseases, if not appropriately treated, would migrate into the bigger society with the prison officer and his immediate family as transporters.

The job of the prison officer is very stressful and its risky nature takes a toll on the health of officers. As a result, stress related diseases like hypertension and depression are common among officers.

The need for recognition

The prison officer, like the prison system, has for long been sidelined by the entirety of the Ghanaian populace. This, I think, is because society believes prisoners deserve to suffer for crimes committed.

The truth is, imprisonment on its own is a punishment, as lots of rights are taken away from the offender. The rest is for society at large to commit to sufficiently supporting the operations of the Ghana Prisons Service as it strives to reform offenders to make them useful to society.

Cars and logistics are needed for the smooth running of our prisons. Decent accommodation should be built for officers so that they can rest in comfort after a hard day’s work in furtherance of the wise saying that, “If you know you are going home, no journey is ever too hard”.

It is necessary for all to note that, if the Ghana Prisons Service fails in its quest to reform and rehabilitate prisoners, the Ghanaian cannot enjoy a sound sleep because, ex-convicts would re-enter society unchanged.