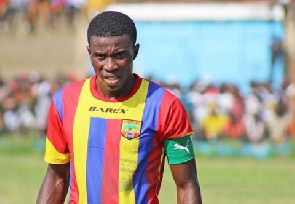 Out-of-contact winger Thomas Abbey is on a verge of making a return to Accra Hearts of Oak after leaving the club when contract renewal talks stalled at the end of last season.

Abbey went on a two-week trial with South African giants Ajax Cape Town last month after he attained floating status but failed to land a deal.

Hearts are facing stiff competition from two American top-flight sides, New England Revolution and Minnesota United who are also reportedly weighing up a move for the player.

But according to a source within the camp of the Phobians talks are well advanced as they look to tie down their skipper ahead of the new season.

Hearts of Oak are becoming increasingly confident they will have Thomas Abbey back in their ranks when preseason training resumes on January 3rd, 2018.