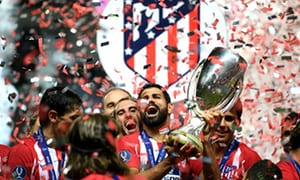 Thomas Partey put up an inspiring substitute performance for Atletico Madrid as they defeated city rivals Real Madrid 4-2 in the UEFA Super Cup on Wednesday evening.

The Ghanaian international was surprisingly left out of the starting line-up by Diego Simeone who preferred a midfield quintet of Lemar, Rodri, Saul and Koke.

Diego Costa opened the scoring – just one minute – but goals from Karim Benzema and then a Sergio Ramos penalty gave Real the lead, before Costa levelled late on to send the tie to extra time.

Partey came on as a replacement for Lemar in the 91st minute with extra time looming.

The Ghanaian’s introduction proved to be a tactical master stroke as the Rojiblancos immiediately siezed the iniative and began to dominate the middle of the pitch in extra time.

Partey’s cross in the 98th minute set up Saul who scored a wonderful volley to put the Colchoneros back into the lead.

Before Koke put the icing on the cake minutes later to ensure his side began the season by lifting the coveted trophy.