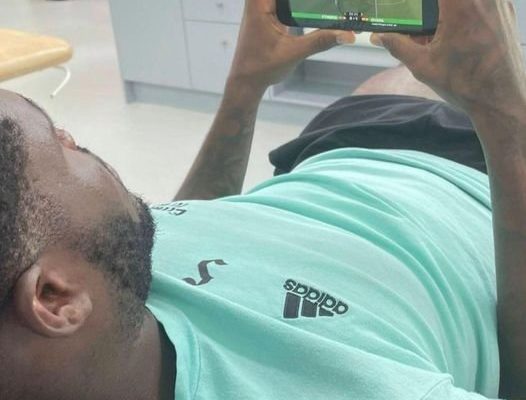 Ghana sorely missed Arsenal midfielder Thomas Partey in their 1-1 drawn game on Thursday afternoon at the Orlando Stadium when they faced the Walia of Ethiopia.

But whiles Ghana was struggling against Ethiopia, the midfielder was streaming the match live on his cell phone in the Arsenal treatment room.

Thomas Partey  missed Arsenal’s clash against Watford last Sunday due to a ‘tight groin’, the club confirmed.
He was instrumental in the last qualifiers as Ghana defeated Zimbabwe back to back scoring in both games including the winner in Harare.

The Ghana international has played a pivotal role in Mikel Arteta’s side this season, especially in the wake of Granit Xhaka’s long-term knee injury.

But Partey was a surprise omission from the Gunners squad for last Sunday’s Premier League meeting with Watford, with Ainsley Maitland-Niles replacing him in the starting XI as they won 1-0.
Arsenal stated that Partey was absent due to a groin issue which ruled him out of action for the Gunners’ final fixture before the November international break.

He missed Ghana's game against Ethiopia and will also not feature against South Africa on Sunday.