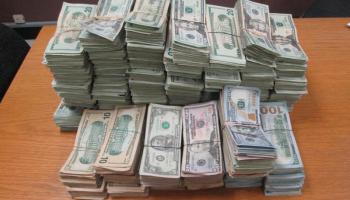 An amount of $143,000 was seized from three Ghanaians by officers of the United States Customs and Border Protection.

The money was reportedly seized from two men who departed for Ghana, and one who arrived from Ghana in three separate incidents during the weekend at Washington Dulles International Airport.

The names of the men are withheld by the U.S Customs and Border Protection because none of them have been criminally charged.

The incident occurred on Saturday and Sunday when CBP officers who were on an outbound inspection operations seized $100,111 from a man destined to Accra, Ghana, who initially claimed that he possessed $2,000.

However, CBP officers discovered $10,000 in each of 10 bank envelopes in the man’s backpack.

Another incident involving a Ghanaian on Sunday, saw the CBP officers seize $20,031 from a man who arrived from Ghana who initially reported that he possessed $10,000.

During an inspection, CBP officers discovered an additional $10,000 wrapped in a t-shirt in the man’s carry-on bag, plus another $31 in loose pocket currency.

On Saturday, CBP officers seized $23,826 from a man bound for Ghana after a currency detector dog alerted to his carry-on bag. The man initially reported that he possessed $5,000. A baggage exam revealed $23,826 in a suit jacket and a camera bag.

Speaking on the issue, CBP Area Port Director for the Area Port of Washington Dulles, Daniel Mattina, said travelers are expected to be honest to officers to avoid such occurrence.

“Customs and Border Protection encourages travelers to be completely honest when reporting all their currency during an inspection with a CBP officer, or be prepared to face severe consequences,” he said

He added that, “The best way for travelers to hold onto their currency is to fully comply with our nation’s currency reporting laws.”

All three men have been released to travel after investigations were conducted.